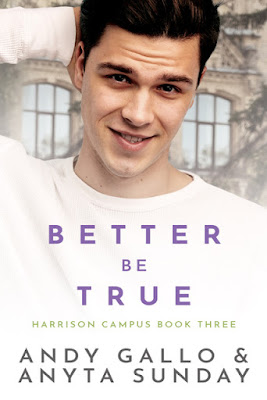 About Better Be True
Two friends. One bed. A big Italian Wedding.

Nico Amato is in trouble.

He’s in love with his roommate. Who’s hung up on his ex. This so isn’t part of his summer plans. Luke’s an all-American jock, a jeans and t-shirt kind of guy. The kind of guy who thinks Nico is too much.

That doesn’t stop Nico from pretending to be Luke’s boyfriend, once, twice, thrice . . . A friend does what a friend does to make an ex jealous.

Just . . . How many favors before Luke gives up on his ex?

Lucas DeRosa has a problem.

His roommate pushes every one of his buttons. Every. Damn. One. This so isn’t part of the script. Nico is flamboyant, a tight jeans/purple blazer kind of guy. The kind of guy who thinks Lucas is boring.

Just . . . How many favors before he wins Nico’s heart?

Better Have True is a roommates to lovers, fake-boyfriend, slow burn M/M romance with a HEA. This New Adult, college, opposite attract novel can be read as a standalone. The Harrison Campus series can be read in any order

Read my five-starred review of Better Be True.

Add Better Be True on Goodreads.

An Excerpt from Better Be True
Luke pushed back from the table, almost too full to move. “That was amazing.”

“Better than mac and cheese from a box?” Nico’s phone buzzed on the table near him. He leaned over and read the screen.

Luke almost grabbed Nico’s phone to look at the message as his friend walked to the sink. Whatever he’d read flattened his mood.

“Huh?” Nico turned on the water and glanced over.

“I asked if you’re okay. You read something on your phone and now you look . . . different.”

“That? No, everything’s fine.” He rinsed off the plates and put them in the dishwasher. “My sister isn’t coming down this weekend. Her fiancé is going to New York.”

Luke carried the serving dishes into the kitchen. “Oh, no. Mrs. R isn’t going to get the world-famous Amato Pastry Sampler you promised her.”

“No, she’ll get them. I’m supposed to go up too.” Nico continued to clean in silence.

“Okay, now I know something is wrong.”

Nico stopped and looked over. “What?”

“You’re washing the pots.” He pointed at the soapy baking dish in Nico’s hands. “You said the plan was you cook, I clean.”

“I was only kidding about that. Besides, you helped cook.”

“What’s going on?” What was it Nico had said? Amato men never asked for help. “Can I help?”

Luke leaned against the counter so Nico couldn’t avoid him.

“Nothing’s wrong, it’s just . . .” Nico stared hard at Luke, a tiny frown creasing his brow. Something flashed in his eyes, and his cheeks colored. Nico fidgeted with the sponge and hummed. “Remember when I said I might call in the favor from yesterday?”

“Well, I . . . the thing is.” Nico put the sponge down and wiped his hands on the towel. “First, if you can’t, it’s not a problem. I don’t want you to feel obligated or anything.”

“Nico.” Luke grabbed him by the shoulders. He’d never seen Nico so flustered. “Just spit it out.”

“Nonna wants me to come home for a family dinner.”

Luke rolled his hand in between them. “And?”

“They want me to bring my boyfriend.” 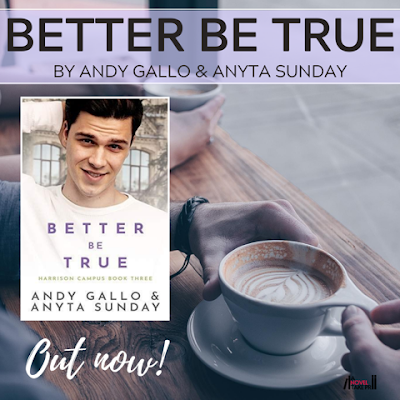 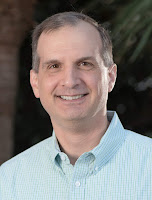 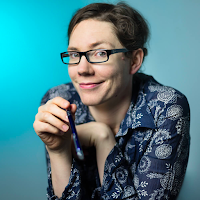 Andy Gallo prefers mountains over the beach, coffee over tea, and regardless if you shake it or stir it, he isn’t drinking a martini. He remembers his “good old days” as filled with mullets, disco music, too-short shorts, and too-high socks. Thanks to good shredders and a lack of social media, there is no proof he ever descended into any of those evils.

Andy does not write about personal experiences and no living or deceased ex-boyfriends appear on the pages of his stories. He might subconsciously infuse his characters with some of their less noble qualities, but that is entirely coincidental even if their names are the same. And while Andy leaves the hard sci-fi/fantasy for his alter ego, Andrew, in his mind a touch of the supernatural never derailed a good relationship.

Married and living his own happy every after, Andy helps others find their happy endings in the pages of his stories. He and his husband of more than twenty years spend their days raising their daughter and rubbing elbows with other parents. Embracing his status as the gay dad, Andy sometimes has to remind others that one does want a hint of color even when chasing after their child.

A bit about me: I'm a big, BIG fan of slow-burn romances. I love to read and write stories with characters who slowly fall in love.

Some of my favorite tropes to read and write are: Enemies to Lovers, Friends to Lovers, Clueless Guys, Bisexual, Pansexual, Demisexual, Oblivious MCs, Everyone (Else) Can See It, Slow Burn, Love Has No Boundaries.

My books have been translated into German, Italian, French, and Thai.