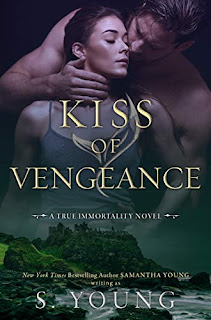 Bestselling author Samantha Young returns to her True Immortality paranormal romance series, which she has penned under her S. Young pseudonym, with the second novel, Kiss of Vengeance. This is the story of Fionn Mór and Rose Kelly, and theirs is a tale about a centuries-old betrayal leading the thirst for revenge and unexpectedly uncovering secrets and finding love in the process. For the record, you can pretty much read this second book as a standalone since it’s about a couple different from the one in the series starter, War of Hearts; however, because there is a story arc that will run throughout the series, you may want to venture forth and read the books in order. Trust me, you won’t regret actually doing so.

There was a point in time that Fionn Mór stood proud as an Irish high king—a warrior who was much beloved and respected by his people. He would have done anything for them, even offer himself as consort to the very Fae Queen he swore to protect his family and kingdom from. When the opportunity to escape came, Fionn took it, only to experience the worst kind of betrayal—the kind that came from those he thought he could trust. Now, all he has is vengeance in his heart, and he’s hell-bent on getting it at all cost—even if it means using Rose Kelly as his pawn. She’s just discovered a world and powers beyond her imagination and he’s promised to guide her through it all. His help, however, will come at a cost. He’s known it from the very beginning. Will she realize his deception and will it cost Rose her innocent heart?

Samantha Young has created a world that I may not necessarily want to live in permanently, but I sure as heck like exploring it for the two three hours that it takes for me to read the books in her True Immortality series. Fionn is intense and complex and certainly not the easiest of heroes to warm up to, but goodness me, his evolution was fascinating to witness. Then there’s Rose who has to be, hands down, one of Young’s most notable and inspiring heroines, one who was made of far more sterner stuff than you would expect. From start to finish, I was enthralled by Kiss of Vengeance, which is why I’m giving it five out of five stars. ♥

Read my reviews for the True Immortality series:

War of Hearts (book one) - five stars - My Review