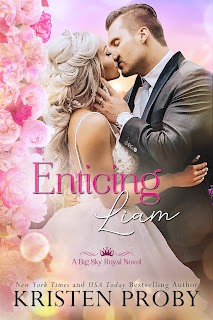 I've been eagerly awaiting this book ever since I finished reading Enchanting Sebastian, and Enticing Liam certainly did not disappoint! This is the second novel in Kirsten Proby's Big Sky Royal series, and it's about a princess and her bodyguard. She may have just received her latest proposal of marriage, but that doesn't mean Princess Eleanor has ever truly been in love. She hasn't found anyone worthy enough to share her body with, what more her heart? Sure, she's twenty-five, still a virgin, and has decided the best way to get rid of a pesky bully of a suitor is to fly all the way from London, England to Cunningham Falls, Montana, but what's a girl to do? Definitely not ask the bodyguard temporarily assigned to her to teach her a thing or two about sex. But Ellie does exactly that, and now, Liam Cunningham is at a loss. He knows he needs to keep his distance and keep things as professional and platonic as possible. She's a decade younger than he is and he suffers from PTSD thanks to his time in the Army. Plus she's a member of the royal family--the people who employ him. But Ellie is an enticing temptation that Liam can't resist.

Kristen Proby's Love Under the Big Sky series and its Big Sky spin-off are my favorites from the author, and the Big Sky Royal series may soon join the ranks. I adored Ellie and Liam's story! These two had a lot to contend with, and I'm not just talking about the fact that Liam lives in the United States while Ellie lives in the United Kingdom. Liam didn't consider himself the sort of guy that someone of Ellie's stature AND nature needed in her life, but Ellie had a bit of a rebellious streak to her. She had her own mind and she listened to her heart, and while there was a bit of push and pull between the two of them, they truly were better people when they were together. Of course, there are still challenges, and while the happy ending part is a given, I'm going to stop here before I end up divulging everything else in the story and spoil it for everyone who has yet to read the book! We do get to see couples from the earlier books in the first two series as well as Sebastian and Nina here PLUS we find out who the next couple is going to be in this current series.  A quick note: the books can be read as standalones. 4.5 stars go to Enticing Liam. ♥

Read my reviews for the Big Sky Royal series: