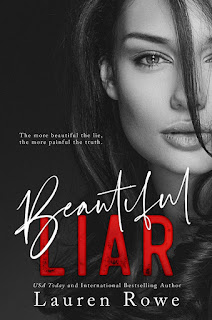 Beautiful Liar is the second novel in the Reed Rivers trilogy, and any qualms I may have had about this book were thrown to the wayside because this was above and beyond what I'd hoped for. Reed Rivers is a man used to get exactly what he wants, and he's finally got Georgina Ricci exactly where he wants her--in his bed and wherever else he can have her. But if Reed thought he was the one in control of whatever was happening between them, he has another thing coming. His beautiful liar may be addicted to him, but he'd be one hell of a bad liar of he claims he isn't just as addicted to her. It appears that this fiery woman has burned through almost all of his walls. Will either of them survive the aftermath and will the time come when they can put their cards on the table and be truthful?

Lauren Rowe has certainly taken things up a couple of levels with this series, and she has no problem amping up every single aspect of this second Reed Rivers book. More often than not, the second book in a series is the one that ends up being rather...ho-hum. I know, I know. Not all second books are like that, and I'm not trying to generalize here. Case in point: Beautiful Liar. This held nothing back, and Reed and Georgina's story have me as addicted to them as they are to each other. The pacing is quick and the development of both story and the characters are far from disappointing. I couldn't flip from one page to the next fast enough, and had I had an actual paperback in my hands, I would probably be suffering from paper cuts by now. Just a quick reminder: Bad Liar MUST be read prior to Beautiful Liar. So what're you waiting for? Chop, chop! Go read these five-star books ASAP. ♥

Read my reviews for the Reed Rivers series: