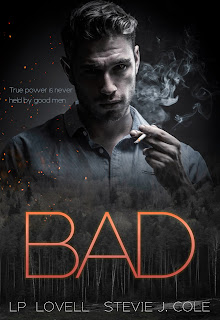 Bad is the first in the new dark romance slash romantic suspense series entitled Bad. Dirty. Power. from the writing team of LP Lovell and Stevie J. Cole. Ronan Cole is no ordinary Russian; he's THE Russian--the head of the Bratva, a position he took because he knew it belonged to him. He relishes in the fear he inspires from people, not particularly caring what's thought of him. When a deal with a Mexican cartel falls through, Ronan is far from happy. No one says no to him. He takes matters into his own, kidnapping Camila Estrada, who is not merely the sister of the face of the Juarez cartel--she is the power behind the throne he sits upon. Having Camila as Ronan's pawn was all part of his carefully constructed plan, but she is anything but a meek victim. Camila is just as ruthless as Ronan and she isn't afraid to take what she wants. They both crave the bad and the dirty. What they crave most is the power. But upon being in each other's forced company, Ronan and Camila have to come to terms that they're beginning to desire something that they know could well spell their respective ends. These two crave each other.

Having read The Game serial from this writing duo, I wasn't surprised by how dark they could take this new series starter of theirs. Ronan (whose name, admittedly, is more Irish than Russian) is an unapologetic anti-hero (and even that doesn't seem to be a label that fits him), but then Camila is just as unabashed about her being an anti-heroine. These two aren't just bad--they're devious and possibly even downright evil. The thing is, you can't hate either Ronan or Camila. They are who they are and while the acts they engage in may be deemed deplorable, there's no denying that they're enigmatic, and they made me want to dig deeper and find out if they actually have any redeeming qualities. The story does not hold back in terms of what these two do to and for each other, but then I didn't expect anything less from Lovell and Cole. This does end on a cliffhanger, and there's a nearly three-month wait for the sequel, Dirty, so you may want to wait if you're a cliffy hater (though I wouldn't be surprised if book two a cliffy too). Whether you do decide to wait or not, let me just say that Bad was anything but! Four stars. ♥