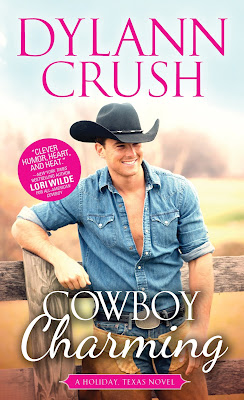 They call him Casanova. But can this charming devil of a cowboy teach a good girl how to change her ways?

Small-town preacher’s daughter Dixie King is used to having a lot on her plate. Keep tabs on her flighty grandmother? No problem. Handle the honky-tonk’s first ever Chili Cook-Off? In the bag. Vamp it up to charm a would-be developer into leaving Holiday, Texas for good?

Enter Presley Walker: Holiday’s own Cowboy Casanova and the perfect tutor for a good girl looking to go bad. He’s got charm in spades, and he’s always seemed like a terrible idea waiting to happen. But as Presley and Dixie work together to save their beloved hometown, these polar opposites might finally see the good in each other…if they can only learn to trust their hearts enough to fall.

An Excerpt from Cowboy Charming
Dixie King hoisted the tray of longnecks onto her shoulder and sashayed through a busier-than-usual Thursday-night crowd. Spring finals week must be coming to a close for the frat boys and pseudo-cowgirls who considered the Rambling Rose their personal stomping ground. Sidestepping a clean-shaven guy in a polo shirt with grabby hands, she delivered the bottles one by one to the impatient patrons.

That right there was why her daddy never wanted her to take this job. As the resident preacher in the tiny town of Holiday, Texas, he feared for her moral safety. Funny thing was, he had absolutely nothing to worry about. Beyond the occasional ass-grabber or drunken proposition, Dixie hadn’t been involved with a man in years.

She made her way back to the bar to snag another load. As she transferred the bottles and mugs onto the tray, a body slid onto the stool at the end of the bar.

She’d have known it was him by the hint of intoxicating cologne that drifted off the man in a hormone-inducing wave. If her daddy wanted to pray for someone, Presley should be at the top of the list. Although it may be too late for him. Dixie figured he might not have any morals still intact.

“Hey, Red.” He took one of the bottles off the tray and tilted it in her direction before giving her a wink and lifting it to his lips. Even though something as simple as a smile from Presley Walker could make her thighs quiver for days, she ignored the urge to slip onto a barstool and make believe it was her mouth receiving the attention of his lips and not a mere bottle of beer. Fantasies involving Presley were just that—fantasies. She couldn’t afford to get caught up in wishing anything more would ever happen between them. She’d play off his attention like she always did—with a mixture of disdain and sass. The combination had proven effective over the years at deterring any potential advances from Holiday’s resident Romeo. Not that he’d follow through anyway. The way her daddy had treated her first long-term boyfriend had pretty much guaranteed no other eligible man in Holiday would be willing to subject himself to Pastor King’s scrutiny.

“Red? Gosh, Presley, what wit. I haven’t heard that one before.” She rolled her eyes then grabbed the extra beer the bartender handed her. Her red hair came from her mother’s side of the family, specifically her grandmother. Too bad she hadn’t also inherited the free-spirited, devil-may-care attitude her grandma Eugenia was known for.

“Hell, Dixie, I’m just warmin’ up.” Presley’s gaze drifted over her. The man could summon heat from an ice cube. Her skin burned under his attention. She felt like she was standing in the middle of the crowded honky-tonk in nothing but her birthday suit.

She groaned and whirled around, ready to run the gauntlet through the handsy crowd again. She’d rather face down a room full of cocky frat boys than get stuck face-to-face with Presley Walker. Her reluctance had absolutely nothing to do with the way his blue eyes sparkled or how his mouth tipped up in a crooked grin, making heat pool in places she didn’t want to acknowledge. And everything to do with the string of X-rated dreams she’d been having over the past several months—starring who else but Holiday, Texas’s most notorious bachelor.

Maybe she should do what her daddy had been encouraging her to do ever since she took this job—quit. But the tips were good, and working the late afternoon and evening shifts meant she could help out more at home. Besides, she needed the money if she wanted a place of her own someday. She had her heart set on opening a little artist studio where she could make and sell the handcrafted jewelry she’d been working on for the past few years. There were several other local artists in the area she’d love to feature as well. Another year or two and she’d be able to turn her dream into a reality.

Too bad that meant having regular run-ins with the blue-eyed demon. She shook her mass of red curls, trying to dislodge the memories of last night’s dream from her head. It wasn’t like Presley would stop coming around. Not only was he the local sales rep for the liquor supplier, but his sister, Charlie, and brother-in-law, Beck, owned the Rambling Rose.

Which meant she needed to keep him out of her head…and definitely out of her dreams. About Dylann Crush
Dylann Crush writes contemporary romance with sizzle and sass. A romantic at heart, she loves her heroines spunky and her heroes super sexy. Although she grew up in Texas, she currently lives with her unflappable husband, three energetic kids, a clumsy Great Dane, a rescue mutt and a very chill cat in a suburb of Minneapolis/St. Paul.