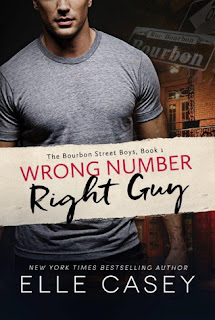 When freelance photographer May Wexler receives a text message from an unknown number telling her to go to a bar, she immediately assumes it's from her sister's new phone. Once she gets to the bar, however, all hell breaks lose and May finds herself dragged away from the scene by a man with the world's ugliest beard. With her safety becoming top priority, May puts her life in the hands of the Bourbon Street Boys, a private security firm composed of a myriad of personalities and headed by the too-hot-for-words (and no longer bearded) Ozzie. Soon, she's being offered a job taking advantage of her photography skills and her gift for taking note of details. While the wrong number may have led to more complications than she could have ever imagined, May wonders if it also led her to the right guy for her--even if he is her boss.

For the record, I've read books that have made me laugh out loud before, but Wrong Number, Right Guy is the very first book that had me laughing non-stop (a mix of laughter without any sound and some actual snorting) for a good five minutes, leading to my best friend looking at me like I had finally lost my mind. And then it happened again a couple pages later and became a regular occurrence until I finished this The Bourbon Street Boys series starter from bestselling author Elle Casey. This was such a wonderfully delightful read, one filled with hilarity and a good amount of suspense and romance for thrills and chills. It takes a message from a wrong number to lead May Wexler on a misadventure of a lifetime, but one that brings her to a set of quirky people and a guy named Ozzie who has her drooling worse than her dog Felix.

I would have given this book a five-plus-starred rating for the entertainment value alone, but I'm going to have to bring it down a notch because I wanted to learn more about Ozzie and his history (and a last name would have been nice as well). He's such an intense guy but he's also someone who takes care of  his team and those who mean the most to him, which includes May, Felix, and Ozzie's dog Sahara. There were also some gaps that I wish were filled, like is Oswald really Ozzie's name and if so, how did May figure it out. I'm going to assume that the other ongoing cases will be resolved in future installments, but then I've been known to be wrong before (yes, it does happen). Still, I loved May, Ozzie, and the rest of the rambunctious cast and this side-splitting 2015 fave romantic suspense story. Five stars for Wrong Number, Right Guy! ♥