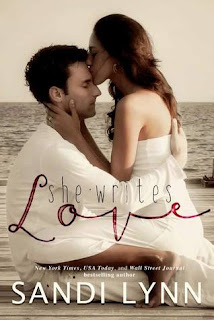 It's been nearly a year since twenty-seven-year-old Paisley Logan lost her husband to a heart attack. They had only been married a year but he was the love of her life. Now, she's still working as a newspaper columnist and she still sees her family, but she hasn't really moved forward, not that she really wants to. Then she reluctantly agrees to attend a support group for people who have lost their spouses. There she meets twenty-nine-year-old Ben Preston, a firefighter, who lost his wife to cancer a month or so before Paisley's husband passed. Just like her, Ben is stuck, leaving things just as they were when his wife was still alive. The grief they're going through or how they're trying to cope can't be fully grasped by their families or friends, but they understand each other perfectly, and from their grief, they find friendship and more.

She Writes Love... is a standalone contemporary romance novel from bestselling author Sandi Lynn and is a beautifully written story about losing the one you love, coping with that loss, and finding a way to continue living your life. There are different kinds of grief, but losing the person you were meant to spend the rest of your life with is a grief that not many people can claim to have experienced. When we first meet Paisley and Ben, several months have already passed since they lost their respective spouses, but the feeling of loss is as strong as ever. Their families and friends try their best to give them the support they need but also try to push them forward. Who's to say when someone should stop mourning a death? The pushing and prodding may seem invasive and insensitive, it always came from a place of love in this story.

Paisley and Ben were wonderfully crafted main characters who break your heart with their stories of how they met, fell in love, and lost their husband and wife, respectively. There's a quiet strength to both of them but there's also that vulnerability that they're able to show one another even though they shield everyone else from that side of them. The feelings of guilt once they were beginning to recognize and act on their mutual attraction and affection for one another was perfectly understandable, though to label it "attraction and affection" seems to minimize the depth of it all. The book is about the individual journeys they are on--to find a way to move past the grief and re-discover love again--and the journey they both take together. They went through anger and depression but also experienced happiness and contentment.

There's a twist in the story that I figured out in Chapter Six, but I won't explain what it was that gave it away on my end because I don't want to spoil it for those of you who have yet to read the book. So, when everything is revealed close to the end of the story, I wasn't surprised, but I do think it adds a sweet touch to the whole book. Aside from the twist, I must say that I was teeny, tiny bit disappointed about the story line involving Ben's family because it felt unresolved, though I did like how Ben's sister Leah seemed to truly find a connection with Paisley's brother Keaton. With that being said, this was an overall excellent read for me, one that I breezed through faster than I thought I would. This was my first Sandi Lynn-authored read but it won't be the last. I highly recommend She Writes Love... and I'm giving it 4.5 stars. ♥