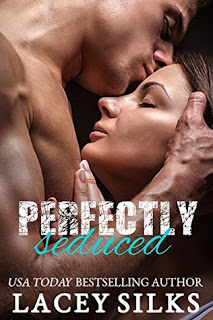 Sean Marks is excellent at what he does and he always makes sure each assignment is done well. His latest one, however, sparks a niggling of doubt as to her guilt as well as something else...something more. From the moment he first saw her in Hawaii, April Davis stirred emotions within him that he believed he would never find again after seven years. His client claims she's guilty but as he gets closer to April, Sean simply can't see the single mother as being conniving or sinister. Crossing the line between his professional and personal lives has Sean racing to find out the truth while keeping April and her son safe before it's too late.

Perfectly Seduced is a romantic suspense novel from bestselling author Lacey Silks and one that I recommend you read after you finish the prequel novella, Perfectly Equipped. This is my fourth Lacey Silks read and it is, by far, my favorite. It's fast-paced but never skimps on important details or even the extras that add further excitement to the overall reading experience. The cast of characters includes quite a few who leave their mark on you, namely the main protagonists--Sean Marks and April Davis--and their respective families and friends. This was an exciting story that had mystery, action, erotica, and romance.

There are a few twists in the story and while I did end up figuring out what was going on with the missing fifty million dollars that Sean was looking for as well as the whole sweet side story about the quarters, it never deterred from me wanting to see how it would all be revealed. Based on the four books that I've already read, Lacey Silks never fails in pulling a smile or even a laugh out of me from time to time. Even amid the more serious tone of this book, the humor is still there, and it's something that I've come to expect when it comes to a Lacey Silks read. I'm happily recommending Perfectly Seduced. It gets five stars. ♥