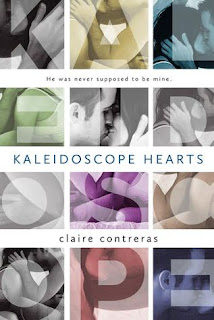 He taught me to understand that the thing about love--real, over the top, makes you feel crazy, overpowering, strips you bare kind of love--is that when you're soaring, you're higher than you dreamed possible. But when you fall, you land inside the deepest crevices, and are left alone to pull yourself out.

It's been nearly a year since Estelle Reuben lost her fiancé to a sudden heart attack. She wants nothing more than to move forward but when Oliver Hart works his way back into her life, she finds herself desperately clinging to reasons why they shouldn't re-start something that never seemed to move beyond stolen moments. Even with all the heartache he caused her, Elle is unable to resist the first boy she ever loved, but will she finally come first in his pre-planned life or will she find herself being left behind again?

Kaleidoscope Hearts is the first book in the Hearts series from author Claire Contreras and is a multiple-chances love story between Elle Reuben and Oliver Hart, two people who fall for each other at the ages of sixteen and nineteen, respectively, but are unable to make a true go of a relationship. Oliver is best friends with Elle's older brother Victor and the friendship is just one of the reasons why he's held back on making more of an effort to be with Elle, although they do have more than their share of clandestine encounters.

Elle and Oliver's non-relationship lasts for nearly a decade, with a lot of stop-and-go going on between them. Your heart can't help but break for Elle, who, in spite of an engagement with her late live-in boyfriend, always seems to set herself up for disappointment when it comes to Oliver aka Bean. There's no denying the depth of their feelings for one another, but Oliver appeared to take Elle for granted, constantly assuming that she would be there when he was finally ready for an actual relationship with her.

Oliver is a highly driven individual, with his primary focus on his education and then his medical career. There are reasons for his being as ambitious as he is, which certainly makes it easier to comprehend his actions. Still, there's no denying that there's a fair amount of frustration when it comes to his inability to commit to something (anything!) when it comes to Elle. Yes, he's always loved her, but doing absolutely nothing or the bare minimum to keep the connection going makes him increasingly unworthy of dear Elle.

This love story is more about having the right kind of love at the wrong time, especially considering how many opportunities Elle and Oliver had to be much more than they were for so long. Sometimes, a person simply wants to be secure in the knowledge that they matter and that the love they have for you is valued and appreciated. You can't help but wish people know the kind of gift they have in their hands, but sometimes, losing it is what makes opens your eyes to the truth. Kaleidoscope Hearts gets five-plus stars. ♥