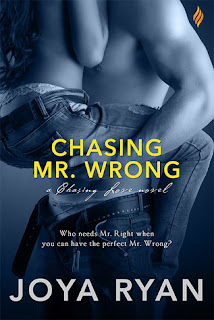 Ryder Diamond has had to live up to the expectations people in his hometown have set for him, especially with the kind of legacy his father and grandfather have. He's polite, controlled, and responsible, but one hot encounter with the woman his best friends have set him up brings out the man he hasn't been ever since he got his heart broken by a woman who only saw him for his name and his wealth. It was just one time but when he finds Whitney James working for his sister, he quickly realizes two things: one, being with Whitney was a case of mistaken identity, and two, he still wants her as much as she wants him. Whitney is a distraction that he never anticipated and there's no denying that he loves being with her. But will ever be ready to risk his reputation for a woman that pushes him beyond his tightly-held boundaries?

Chasing Mr. Wrong is the latest installment in the Chasing Love series by Joya Ryan and has tightly wound Ryder Diamond falling for flighty Whitney James. Their first meeting was funny but quite steamy and I liked how these two had that connection from the get-go. Admittedly, Ryder was kind of a jackass from the time he realized Whitney was going to be staying in Diamond, Kansas for a period of time. He was polite but he was still a jackass and there's a point in the book where he treats her like crap. Of course, the rest of the gang is there to knock some sense into him, but I can't help but notice that Colt and Jenna McCade aren't as visible as the others in the group. I'm also curious to see if Lily McCade will be getting her story told soon because the girl deserves her happily-ever-after. Four stars for Chasing Mr. Wrong. ♥