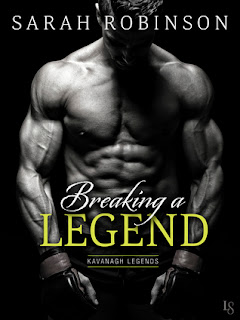 Rory Kavanagh was one of the top mixed martial arts fighters in the entire nation before a devastating injury prematurely ended his career. A year later, he's dealing with the lingering pain and loss by popping pain killers and drowning in alcohol. Then he meets Clare Ivers at a bar and behind her shy smile is a feisty and sassy woman who captures his attention. When he sees her again at the Kavanagh-owned Legends gym, he decides to actively pursue her. The more time they spend together, the more they fall for each other, but both Rory and Clare have dark secrets they refuse to share--secrets that could tear them apart.

Breaking a Legend is the first book in the contemporary romance series entitled Kavanagh Legends from author Sarah Robinson and is about the Kavanagh family, known in their town of Woodlawn, New York and beyond. This series starter has the eldest among the Kavanagh siblings, Rory, a former MMA fighter, and Clare Ivers, a bartender from California running from her abusive ex-boyfriend, meeting and falling in love, but also dealing with lingering effects of what happened to them in the past. There's a hint of suspense due to Clare's ex-boyfriend as well as lighthearted humor mixed in with the drama and romance.

Rory is battling both prescription drug and alcohol addiction, two things that appear to have been going on for about a year or so, and while these issues played a prominent part in the story, it felt as if Rory's overcoming said addictions was somewhat unrealistic. For someone who popped pills every time he felt a twinge in his injured leg, quitting cold turkey and only relapsing when Clare walks away seems overly simplistic. Addicts struggle to become sober and no longer dependent on their vice of choice, and while it is mentioned that Rory is tempted, I wanted to see him dealing with it all rather than being told in passing.

One of my favorite things about the book was how the Kavanagh family is tight-knit yet each of the brothers plus their cousin Casey has a distinct personality, which I hope will mean a different flavor for each book in the series. Then there's also Ace, Rory's dog that he rescued and cared for, and the spotlight on animal rescue and rehabilitation. I'm a sucker for canines in books and Ace wasn't merely decorative; he was an important character in Rory and Clare's love story. With a good cast of recurring characters and a a pretty good overall story, Breaking a Legend may appeal to MMA romance fans. I'm giving it four stars. ♥