Review: Worth Every Second by Jocelyne Soto 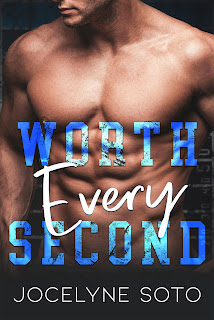 Note: An advance reader copy (ARC) was provided by the author via Wildfire Marketing Solutions.
It's been a good year so far when it comes to discovering new-to-me authors. The latest is Jocelyne Soto, and my introduction to her writing is Worth Every Second. This new adult, college romance with some football thrown into the mix was such an entertaining read! Featuring two main characters who form a connection in the most unexpected of ways, this romance held my attention as much as it did my heart from beginning until the end. I read this standalone in one sitting. By the end, I knew I'd keep an eye on more from Soto.
Catching his girlfriend cheating on him with his best friend and teammate was a blow to twenty-one-year-old college senior and football player Hunter Jacobi. When he comes across the HEX forum, he's inspired by posts of people sharing photos of their bodies anonymously. He decides to follow suit as HUN4ALL, and begins messaging with SENFULL94. Their conversations are both engaging and enticing, and Hunter craves this woman whose body he seems to know intimately but whose face he's never seen. But then there's Selena Montez, the twenty-two-year-old whose seat in Biology is right beside his. There's something about her he can't resist. There's something familiar about her too.
I love, love, LOVE that this book was unlike anything that I've read in the college romance sub-genre in recent years. Jocelyne Soto has a way with words, indeed, creating a story that's got the romance down pat, full of that delicious tension between the characters, but she's also managed to strike a delicate balance between the more lighthearted aspects with the notably angsty parts. Hunter and Selena are two characters I won't soon be forgetting. They were very much in their twenties but with a sense of maturity to them that I appreciated. Worth Every Second gave me all the feels and easily deserves 4.5 stars.
Release Date: 31 March 2022
Learn more about Jocelyne Soto.
Purchase Worth Every Second on Amazon.