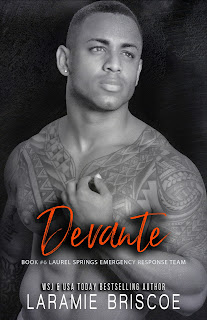 Note: An advance reader copy (ARC) was provided by the author via Give Me Books Promotions.
Laramie Briscoe takes readers back to the small town of Laurel Springs with the sixth book in her popular Laurel Springs Emergency Response Team series. Devante is the story of Devante Soles, a transplant from Atlanta and a part of LSERT, and Eden Murphy, owner of Whole Latte Love and formerly from Chicago. When he needed a change from the impersonal nature of his life in the big city, Devante headed to Laurel Springs. He never expected to find that sense of home and family, but that's exactly what he's been experiencing ever since he got to the small Alabama town. Eden, however, calls to a more protective and caring side of him. He comes to her café on the regular, and not exclusively for a caffeine fix. Eden is just as taken by the sweet paramedic, but she's got a cache of secrets, and the dark past she's on the run from is swiftly gaining ground.
Ah, Devante is the sort of male main character that makes him difficult to not fall in love with. He's sweet, protective, and dedicated, both with his job and the people who mean most to him. I definitely enjoyed learning more about him and what led him from Atlanta to Laurel Springs. I do think that there was a connection between him and Eden, which is a necessary thing for me when it comes to romance novels. I wasn't a huge fan of Eden's however. It felt like she was justifying what she did right before leaving Chicago as something owed to her by her ex. Two wrongs don't make a right, and sadly, that's how I viewed what she did--wrong. I struggled with my feelings regarding her actions once they came to light, and at the end of the day, the more she excused it, the more my affection waned. So all things considered, Devante gets four stars.
-------------------------