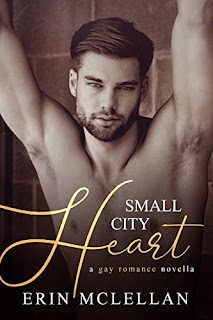 Note: An advanced review copy was provided by the author via GRR ARC Team.

Erin McLellan's novella may be entitled Small City Heart, but it's big on heart and heat and all the feels. Patrick Pearl and Charlie North lived in the same small town and went to the same school, but the two were never friends, which is why Patrick doesn't get why Charlie is acting all friendly now that Patrick is back for a short respite. What he doesn't know is that Charlie has had a thing for him since they were fifteen but kept his distance, not knowing what to do with his feelings, especially with Patrick being out and proud even back then. Charlie wants his shot at being with Patrick, and since this is nothing more than a short-term fling, Patrick is game. After all, there's no future for them, not with Patrick set to leave once again and Charlie loves their hometown. Right?

This was a quickie of a read, and one that I heartily enjoyed from start to finish. I liked seeing how Patrick and Charlie forged an actual relationship together, even though they were both trying to convince themselves that this was merely a temporary thing. They had strong personalities, which I appreciated because the whole shy nerd thing has been overly used. It was also interesting to see how this small town of theirs had changed over time, and how they became more accepting of the LGBTQIA+ members of their community, although there were still the holdouts who need a clue or two. While Small City Heart may have been a short read, there was a lot about it that I liked, proving that having Erin McLellan on my go-to authors list was the right move. Four stars. ♥