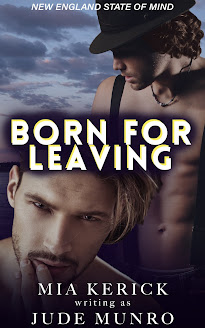 When this title came along in one of my favorite book promotion companies' newsletters, the blurb immediately caught my attention. I have a thing for books with angst, and Born for Leaving sounded like it was going to have a fair amount of angst in it. I'd never heard of Jude Munro before, and I assumed they were a brand-new author; It turns out, though, that the name is a new pseudonym for Mia Kerick, an author whose work I was familiar with. Even without the familiarity of Kerick's name, my curiosity already had me signing up to read and review this New England State of Mind series starter. A couple of quick notes: Don't judge the book by its cover, and be aware of the trigger warnings. The cover doesn't do justice to either the main characters it's supposed to depict or to the great writing. As for the trigger warnings, there are instances of past child molestation discussed, sexual harassment in the workplace, attempted rape, and physical violence, so do consider this your heads-up.

Twenty-five-year-old Oliver Tunstead is a bartender at Surf's Up but acts more like a manager than the actual owner slash manager who also happens to be his ex-boyfriend. Oliver has bills and a mortgage to pay, but he hopes to purchase the car of his dreams, and in order to do that, he needs to rent out the extra room in his cottage. So, when he comes across an advertisement in the newspaper of someone named Bodie looking for a room to rent, Oliver decides this is as good as it's going to get. Of course, he had no idea that the guy was not only going to turn out to be an actual cowboy--and a hot one at that--but the new bouncer at the bar they now both work at. Twenty-eight-year-old Nicholas Bowden is a mystery, but he adores Oliver's senior dog, Hugo, and there's a connection between Bowie and Ollie that's difficult to ignore. When their boss, aka Ollie's ex, gets wind of their relationship, complications abound.

Suffice it to say, Jude Munro can write--not that I had any doubt considering the work that's already been published under Munro's other pen name, Mia Kerick. Ollie and Bowie are interesting characters with back stories that have a whole lot of events that have made them into the wary people they are now. I appreciated that there was a foundation of sorts that was established with them being roommates and co-workers and then becoming friends before they shared that first kiss and developed into far more. The main villain in the story, though, comes off as more of a caricature--rather over-the-top with his sexual innuendos and advances. I confess that it did bother me that no one under his employ saw fit to say or do anything regarding the countless instances that he crossed the line. The resolution of what happened between this person and one of the main characters was disappointing as well, but I get that not everybody acts and reacts the way I think they should. The friends Ollie and Bowie made at Surf's Up were notable supporting characters as well, and Hugo was a scene-stealer. So, all things considered, Born for Leaving garners four stars out of five stars.

Purchase Born for Leaving on Amazon.