Review: Cheesy on the Eyes by Teagan Hunter (Slice #4) 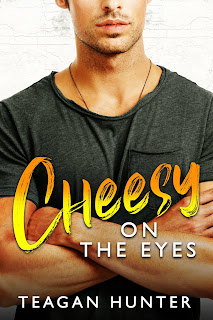 Ah, but how this series has been a joy to read! Teagan Hunter wraps up her Slice romantic comedy series with a story about a fake relationship that turns into a friendship, but when it starts to have some notable benefits, it could be the beginning of the end. Set in a small coastal town in North Carolina, Cheesy on the Eyes features a lifelong resident and female mechanic named Althea Schwartz and a computer programmer who has called the island home for a few years named Sullivan Scott. Thea is the older sister to Jonas Schwartz, whose story is in the A Slice of Love novella, and Sully is part of the close-knit circle of friends that includes Winston Daniels, Foster Marlett, and Porter Jones, who are in I Knead You Tonight, A Pizza My Heart, and Doughn't Let Me Go, respectively. While you could probably read this newest novel on its own, I highly recommend the previous books because they're awesomely fun rom-coms with a pinch of angst to them.

Thea Schwartz doesn't go to Slice for their famous and original pizza concoctions; no, she goes there to catch up on work. She loves the ambience and the banter she shares with the owner is always entertaining. When her ex-boyfriend suddenly shows up with his new girlfriend, Thea desperately wishes she had her own new beau to save her any potential embarrassment. Her wish is granted when Sully Scott easily slips into her booth and into the role of doting boyfriend. When she ends up needing him to reprise the role and for extended period of time after she informs her family that she will, indeed, have a plus-one for her brother's wedding, the two shake on it. Rules and guidelines are set, the most important being that feelings are a no-go. She gets a fake boyfriend,and he gets his boat's motor fixed. Win-win. So, why does it feel like they'll end up losing--their hearts, that is--when all is said and done?

I seriously loved Thea and Sully's story! From the moment they catch sight of each other in Slice to that sweet ending, I was all in with these two. Thea may be someone who followed her dream of becoming a mechanic, but it did, in a way, end up costing her the future she thought she would have with her ex. Tht break-up was a blow to her confidence, and my heart went out to her. It would be easy to say that she can move on and find someone more deserving of her, but if she herself doesn't believe it, then that's one heck of a hurdle, right? Which is why I adored Sully. He was someone who had left behind a painful past, but he persevered and made a life of his own and found a great support system with his friends. He was patient and understanding when it came to Thea's fears. I loved seeing them grow together and having the rest of the couples around, plus Simon, Thea's parents, and Mrs. Harkle was like an extra sprinkling of happiness. I'm going to miss Slice! Five stars go to Cheesy on the Eyes. 🖤

Purchase Cheesy on the Eyes on Amazon.