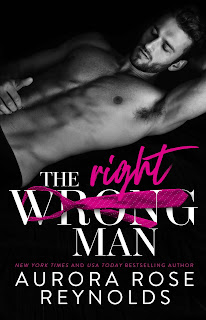 With a lighter feel than what I'm used to from her, Aurora Rose Reynolds's The Wrong/Right Man still has certain elements that I've come to expect. After learning that her fiancé--a man she shared four years of her life with--was cheating on her, Dakota Newton decides to leave him and the home they shared together, moving in with her brother, Jamie, for the time being. She knows moving on is necessary, so she finally agrees to a blind date, albeit reluctantly so. When she locks eyes with the gorgeous man standing outside the coffee shop, she's immediately drawn to him. Sleeping him was a no-brainer because it certainly wasn't her brain telling her to do it, listening instead to the desires of her body. In the light of day, however, Dakota realizes the error of her ways, especially when she finds out that the man she was with wasn't her blind date to begin with! But if she thought she could simply walk away and never see the man again, she has another thing coming. Now that billionaire Braxton Adams has spent time with Dakota, he wants more of the fiery woman's company, and what Brax wants, Brax always gets.

Aurora Rose Reynolds knows how to mold her male main characters into uber alphas who go after the women they want without apology. Such is the case for Brax, who was very much taken with Dakota. She, in turn, gave him a run for his money, refusing to have yet another man control her life without a say from her. There's a lot of push and pull, even as it's clear that these two were developing strong feelings for each other. Aside from the romance, Reynolds has added in a hint of mystery related to something outside of Brax and Dakota's relationship, but I won't give any more information lest I spoil the fun for readers out there who have yet to read this book. This was an entertaining romance, one that was mostly lighthearted with a bit of that mystery element. While not my favorite from Reynolds, I still enjoyed myself and wouldn't hesitate to read should the author decide to write a spin-off for the most memorable of all the characters--Jamie, Dakota's younger brother who happens to be part of an up and coming band. I shall keep my fingers crossed for sure. In the meantime, I'm giving The Wrong/Right Man four stars. ♥