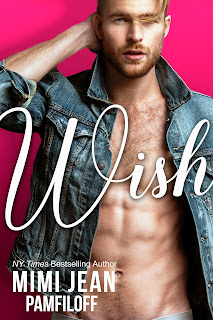 It's been nearly five years since I last read something of Mimi Jean Pamfiloff's, and after finishing her latest standalone, it's clear that I've got a whole lot of catching up to do. Wish is the story of a woman named Ginnie who finds a bottle with a note in it informing her that she has the opportunity to make one wish and one wish only and that she needs to make it count. Was this a joke with someone looking to punk her and have the video go viral? When Marus ends up at her front door, Ginnie isn't quite sure what to make of him. He tells her that he's a billionaire and that the bottle belongs to him. The note means exactly what it says. He wants to grant whatever wish she may have. Money is no object, not for a billionaire wish granter like him. But Ginnie is wary. Why would this Marus person make such an incredulous offer, especially to a stranger like her, and what could be in it for him?

This was an interesting and entertaining read. I had all these theories in my head as to who or what Marus may be and what could be motivating him to make the offer that he did to Ginnie. Their push and pull was the sort that you knew could either be really good or really bad, and thankfully, it was the former. However, there was a point in the story where Marus actions had me sorely tempted to slap him upside the head. Does he redeem himself? Well, yes, he does, but there are some things that aren't quickly forgivable, and I would have been totally wary of him had I been in Ginnie's shoes. Still, I enjoyed the heck out of this book, and I appreciated the author's creativity and her ability to tell a story that isn't run-of-the mill or like every other romance out there. Wish easily gets 4.5 stars. ♥