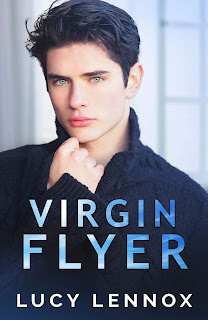 Lucy Lennox has entered virgin territory with her latest release--she's published her first-ever standalone! Virgin Flyer introduces readers to Teodor Parisi and Jack Snyder, who meet via an answered post for an anonymous hookup. Teo is twenty-six and working as a nurse at a home for seniors and has been madly in love with his best friend, Christopher Banks, since they were in college. To add to his private embarrassment, Teo also happens to be a virgin, a fact that no one else knows, not that he has any plans of divulging it. What he is planning is to get rid of his pesky virginity, and what better way to do it than to use a hookup app? Maybe once his V-card's been punched, he'll come off as more appealing to Chris. All he needs is one night with no names or information exchanged and absolutely no talking. He never quite expected the hot stranger who made him feel both desired and cared for, and now, the man consumes Teo's thoughts. Alas, there's no possibility of Teo every seeing the man again...until he steps foot inside a private plane with Chris's grandfather and spies the pilot aka the man he spent that unforgettable night with--thirty-six-year-old Jack Snyder. Will Teo being soaring high or crash landing by the end?

Oh, but how I adored Teo and Jack and their story. From strangers arranging for a hookup to flirty friends with benefits to fake boyfriends, theirs wasn't your ordinary love story, but then, Lucy Lennox isn't known for ordinary. There are countless romance reads out there that have one person in love with their best friend, but this is so not a friends-to-lovers story--well, as far as Teo and Chris go. I felt that Teo deserved so much better than Chris, and there were numerous times where I wished the former were a real person so I could give him a good talking to. Teo was sweet and had this sincerity to him that had me wanting to offer him an endless supply of hugs. His interactions with Chris's grandfather put such a smile on my face. Then there's Jack, and if I'm being totally honest, I was a tad wary about him, especially since he was very upfront about his commitment issues. But goodness, the man was an absolute sweetheart, and he was exactly what Teo needed--and vice-versa!--even though it took a while for them to realize it. As for Chris, well, let's just say I'm still iffy about him, though if Lennox decides to give him an HEA, I'd so read it. But all my stars are dedicated to Teo and Jack and the awesomeness that is Virgin Flyer. ♥