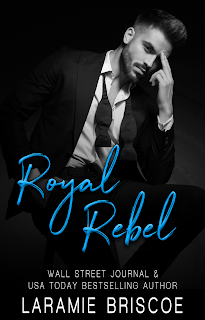 Royal Rebel is the first book in Laramie Briscoe's Haldonia Monarchy series, and if the title for both the book and the series hasn't clued you in, this is a royal romance. Composed of three books, it's a continuing series featuring one couple--Prince Tristan of Haldonia and Amelia Irving. Law dictates that when the heir to the throne reaches the age of twenty-five, the reigning monarch is to abdicate and pass the crown on to the heir. If that wasn't enough pressure on Tristan, because he has yet to find a wife of his choosing, a pre-arranged will match will be put into effect. In six months' time, not only will Tristan be king, but he will need to wed twenty-three-year-old Amelia Irving. Over the next few months, they'll have to get to know each other, and maybe even forge a bond that will make their marriage cordial. What happens instead is more than either one could have hoped for: they begin to fall in love. But what sort of future can they have when so many eyes are on them and Tristan's own emotionally distant father doubts his son's capability of ruling their country well? They believe in duty; do they believe in love?

I like seeing authors whose work I've enjoyed time and again venturing into a new trope or sub-genre. Laramie Briscoe is known for her motorcycle club romances as well as her emergency first responder romances, so I was curious to see how she would fare when it came to a royal romance, and I'm happy to say that she fared well. This Haldonia Monarchy series starter was a very sweet story with a liberal sprinkling of steam. I liked the idea of an arranged royal marriage between the heir to the throne and a commoner--a wealthy commoner, but a commoner nonetheless. There isn't a whole lot of drama or angst in the story, save for Tristan's issues with his father, making for a rather placid introduction to this new world that the author has invited us into. Royal Rebel was a good four-starred beginning, enough to whet my appetite for book two, which I truly hope will amp things up for Tris and Lia. ♥