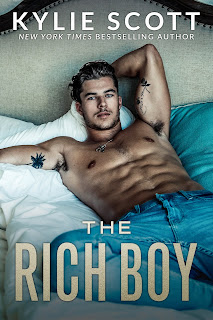 The Rich Boy is the latest standalone from Kylie Scott, and it's a contemporary romance that employs a trope I haven't read in quite some time: secret billionaire. Aside from that trope, we've also got the rich guy-poor girl story angle. Readers are introduced to twenty-two-year-old Alice Lawrence, a waitress at a local bar, and Beck Elliott, the twenty-six-year-old new busboy. Beck doesn't quite hide the fact that he has a thing for Alice. He's both friendly and flirty, a potent combination for a guy who looks as gorgeous as he does. She can't quite wrap her head around the fact that he's even interested in her. Not only is he as good-looking as he is, but he's smart and funny and everything she could ever want in a guy. But it appears that there's more to Beck than meets the eye. When a family tragedy forces Beck to return home and Alice accompanies him, she discovers that Beck isn't some ordinary busboy in California--he's an extraordinary billionaire from Colorado. Can Alice reconcile her busboy with this rich boy and will she be able to survive the world that the Beck Elliott is from and both still come out of it unscathed?

Kylie Scott's newest novel is the ideal weekend read, the kind that you just want to curl up with on your day-off. This certainly left me with a smile on my face, all thanks to two main characters who had me smitten from the get-go. Admittedly, theirs is a story that may require you to suspend disbelief, particularly when it comes to a wealthy guy working as a busboy and a girl following said guy from California to Colorado even though she doesn't know him as well as she should. Here's the thing, though: it's this escapism that made this book as entertaining as it was. This was fairly lighthearted with a smattering of angst and while everything that happened in California between Beck and Alice felt like it was at a fast clip and then it's pulled back to a slow burn once they got to Colorado, Scott brings the elements of her story together to give these two a satisfying happy ending. Four stars for The Rich Boy. ♥