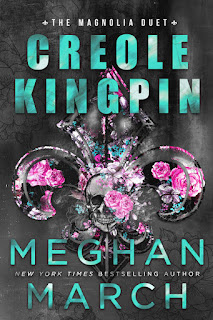 Oh. My. That's it. That's all I've got. Okay, not really, but when I was done reading Creole Kingpin, the first novel in Meghan March's Magnolia duology, I was at a loss for words. I've read every single one of March's books since 2014, and while each one has left its mark, there are those extraordinary few that are a notch above--and Creole Kingpin falls into that category. Maybe it's because Magnolia Marie Maison and Moses Buford Gaspard are familiar characters and their stories are a long time coming. Maybe it's because there was a lot of guesswork on the part of faithful and anxious readers trying to figure out who Magnolia would be paired with. Maybe it's because Moses wasn't exactly the most endearing of guys when we first met him, yet there was no resisting the pull to want to know more about him. Whatever the reason may be, let's just leave it at there was SOMETHING exceptional here.

A decade and a half ago, Magnolia Maison met Moses Gaspard. Over the span of two weeks, they fell and they fell hard. The time came for them to part, and Magnolia couldn't leave while Moses couldn't stay. She thought he would return, but as the years passed, Magnolia learned a painful lesson: the only person she could rely on was herself. She would go on to create an empire of her own, and she's reaped the rewards. She's celebrated many of her gains, but she also knows all to well what loss is and how it lingers no matter how much time has passed. But then the winds shift, bringing with it a change that she isn't wholly prepared for. She's created a life for herself in New Orleans, and now, it's all about to be disrupted by the return of the man who left her behind fifteen years ago.

I had expectations, and every single one of them wasn't just met--they were obliterated. It almost feels as if Meghan March took all the best parts of her each of her previous series and added main characters like Magnolia and Moses and created this superb piece of romantic suspense. I was hooked from the beginning, and rightly so because Magnolia was a spitfire who refused to give in to Moses, no matter how much her heart reminded her that it still belonged to him. And Moses? Goodness gracious me, but how this man took things to a whole new level when it came to proving that what he had with Magnolia was worth a second chance. Le sigh. I'm going to be needing book two, Madam Temptress, soon. I think the wait for April 14th is going to prove to be an arduous one. If you haven't read this author before (seriously?!), start off with Creole Kingpin. I promise, you won't regret it; and no, you don't necessarily need to pre-read anything before this one (but go read them all anyway). Five-plus stars. ♥