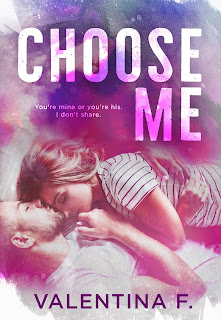 Valentina Ferraro, aka Valentina F., is a new-to-me author, and her newly translated Matching Scars series starter is my introduction to her writing, having been highly recommended by one of my favorite go-to authors, Pam Godwin. Originally released as Scegli me in July of 2016, Ferraro has just self-published the English translation with the title Choose Me. This is a new adult (NA) college romance slash rock romance and we're introduced to Caterina Zanetti, a ninteen-year-old Italian girl who has lived a charmed life. She wants for nothing and has the rest of her life planned out. Then an unexpected opportunity to study in the United States for a year is presented to her. This could be an adventure for Cat, but when she meets her next-door neighbors, they turn out to be a game changers. Mark Carter is as friendly as can be and takes Cat under his wing, but it's his brother, Benjamin, who wreaks havoc on Cat's senses. She's taken by him, even when her initial impression of him is less than stellar, and pretty soon, their feelings for each other grow. But there's already one complication to their happy ending, and it isn't just that Cat's returning to Italy after the year is over. Will she choose the boy she's fallen for or the life waiting back in Italy?

A quick note: This book does contain cheating, so if this happens to be a hard limit for any readers, consider this your heads-up. There's quite a bit that goes on in this series starter, and while it does have a happy-for-now ending, there is an epilogue that makes it clear that something has gone amiss between those two sections. Most of the characters in this story are college-aged kids, so they don't necessarily make the wisest of choices at times, going with impulse rather than taking the time to weigh out the consequences of any actions they may take. I'm not saying that sort of thing is exclusive to that particular age group or that everyone who is part of that group is such, but hey, I'd like to think that as we get older, we know better. Cat and Ben, particularly the former, bring the drama, and that's due in large part to the note I pasted on at the beginning of this section of my review. There were moments of frustration on my end, and that's mostly because I could see the heartbreak coming from a mile away and I wished there was more contemplation and communication happening between the main characters. That being said, this was a promising start and I quite liked the supporting characters. Four stars go to Choose Me. ♥

Purchase Choose Me on Amazon.