Review: Beck by MV Ellis (Gods of the Fifth Floor #1) 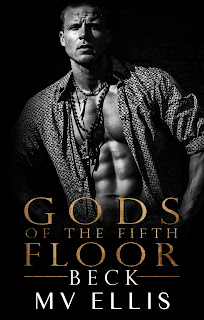 MV Ellis was one of my favorite author finds from last year, and now she kicks off a new series called Gods of the Fifth Floor, alluding to the four guys who founded BR&ND, an award-winning advertising agency located on the fifth floor of the building housing their offices. These four--Beck, Raine, Nate, and Dillon--all attended Yale and went on to become the closest of friends and now business partners, and I'm guessing that each one will be getting their own book as the series moves forward. First up is Tyler Beckett, and his is a second-chance romance with Melissa Reid. He hasn't even hit thirty, yet Beck is basking in the success that he's achieved. He lives a good life, has the greatest group of friends, and could have any woman he wants. However, the woman he truly wants turned her back on him a dozen years ago without a word of explanation. He's always had questions, and it looks like he's finally going to get answers when he and Mel cross paths at a work event. But when he learns the truth and unearths Mel secrets, will Beck be able to forgive the only woman he's ever loved or will he forever hate her?

This series starter had a different feel compared to my previous MV Ellis reads--i.e. her Rough Ink series and Boys of Trinity Hall series--and I mean that in a good way. After all, I always appreciate when an author offers their readers something different and does so in a way that's successful. Beck wins the cake as my favorite male main character from Ellis. He's intense and driven, but there's also something about him that begs to be unraveled. He's very loyal to his friends, and he's innovative and creative when it comes to his work. When Mel comes back into his life, I honestly expected the story to go down a whole different route. Kudos to the author for doing so because it made for a more enjoyable reading experience on my end. While I liked Beck from the get-go--and absolutely adored him by the end--it did take a bit longer for me to warm up to Mel. Let's just blame that on my low frustration level as far as she was concerned, although she did ultimately win me over. I'm giving Beck five stars out of five stars, and I'm so looking forward to reading more from the Gods of the Fifth Floor series as soon as possible! ♥