Book Spotlight: In Search of Truth by Sharon Wray 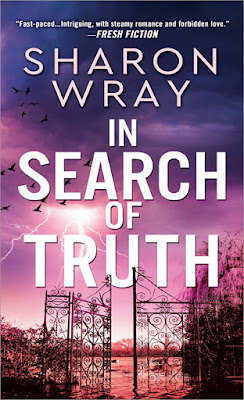 About In Search of Truth
Buried treasure... buried feelings...all about to surface...

Anthropologist Allison Pinckney is stunned when she inherits the key to a seventeenth century pirate cipher that makes her the target of two brutal arms dealers. Now, to save those she loves, she must solve the cipher. With this perilous mission growing ever more dangerous, she reluctantly seeks help from ex-Green Beret Zack Tremaine, the one man she's been avoiding. Because if she gives into her long-buried feelings for him, it could cost them their lives.

Zack Tremaine is haunted by regrets. Years ago, he betrayed his men and lost the only woman he ever loved. Now that his men are caught in a fierce rivalry between two deadly enemies, his only hope is to team up with Allison. She holds the secret to a pirate treasure, and he must take the chance to save his men and redeem his honor. Even if she breaks his heart...again.

Add In Search of Truth on Goodreads.

An Excerpt from In Search of Truth
Through the window, Allison watched the lights in the garden flicker on, and then go out again.

Zack came up behind her and rested his chin on top of her head. “No one knows, do they?”

The whispered words struck her heart with the force of a broadsword. She tried to swallow, but her throat was too dry. She blinked and her face felt hot. The still air had made it hard to breathe.

No. No one knows.

Except she couldn’t get the words out.

“I know how hard it is to carry a secret. To act normal in public, like you’re happy and everything is great, only to know that it’s all a lie.”

She clenched her fists until her nails cut into her palms.

Was he thinking about what happened to his men in Afghanistan?

She felt him swallow and shifted to study his face. Dark stubble lined his jaw, his lips had thinned, and his gaze was fixed out instead of in, as if he were looking for someone.

“When my parents killed themselves at Bayou Saint George, my grandfather was governor of Louisiana. He was obsessed with things like family name and had never been able to accept the fact that my mother refused to marry my father. Or my mother’s mental illness. Grandfather floated the story that they’d gotten married and, after going to Bayou Saint George for their honeymoon, had been murdered by escaped convicts.”

“You never told me that.”

“My grandfather turned Emilie and me into co-conspirators. We were kids, terrified and alone, so we went along with the bullshit story. Years later I went to college and met Stuart. While Stuart’s family can be difficult—­”

“—­they were emotionally connected. They had traditions and memories. They’d built a foundation that, while not friendly, seemed honest and true.”

She agreed reluctantly. She didn’t like Stuart’s family, mostly because they’d never accepted her, but they stuck by each other.

“That’s when I decided I wanted a real family—­a real family who lived by the truth instead of falsehoods.”

“Then I met you, a beautiful woman who had a family history filled with as much violence as mine. Watching you was like looking in a mirror. I saw the pain and loneliness caused by silence and fear. For the first time, I realized how the weight of secrets and lies could crush a person—­or at the very least, cause a person to make choices out of fear.”

Her shoulders shook. She sank to the floor and struggled to breathe.

Zack sat down next to her. “You’re hyperventilating.”

Her breaths came out faster and shorter.

“Allison.” Zack held her face between his hands. “Look at me.”

She closed her eyes and tried to lie down. If she could get to the cooler floor, she’d be okay.

“It’s okay.” Zack’s voice softened. “You don’t have to keep this secret anymore. I know.”

Besides Zack and Maddie, no one else knew.

Except for Isabel. Her dead husband’s mistress.

Stuart is dead.” Zack’s voice was so soft, it wouldn’t even be defined as a whisper. “You don’t have to pretend any longer. Stuart had no right to throw you out of this room, no right to shut you out like you were worthless, like your feelings didn’t matter. And he sure as hell had no right to make you feel like this was all your fault or make you believe you were incapable of loving others.”

She hiccupped a few times before saying, “I couldn’t be what he needed.”

Was that her voice? So shaky and low? Trembling like a daisy stripped of its petals?

“No. Stuart couldn’t be what you needed. He failed you. When he realized that, he was so wracked with guilt he had no idea how to handle it. He shut you out, not because he hated you but because he couldn’t bear to hurt you anymore. Not being able to love you the way you needed to be loved was his greatest shame. Not being able to protect you was his greatest failure.”

“How could you possibly know this?”

“Stuart was one of my best friends as well. Before I left for Afghanistan, we used to talk.”

“Things that men talk about.” Zack pulled her onto his lap and held her against his chest.

She turned until she faced him. Nicholas Trott now lay half on her lap, while she was tucked into Zack’s. She was surrounded by the two heartbeats of those she loved the most. Even if one had that wet dog smell.

Her chest tightened, and she closed her eyes again. Did she love Zack? She honestly didn’t know.

“Zack.” She barely recognized her own voice. “I don’t want to be alone anymore.”

“You’re not, sweetheart. The sad truth is you never were alone.”

She was too busy gasping for air to argue. She’d confessed her greatest secret to the man her husband had always been insecure around and felt lighter than she’d ever felt in her life. What kind of woman did that make her?

Zack stood, pulled her up as well, and they followed Nicholas Trott to her room. When they got there, the power clicked on again. The AC fans whirred and the outdoor garden lights bathed the room. That’s when she saw, in the shadows near her bed, a man holding a gun.

About Sharon Wray
Sharon Wray is a librarian/archivist who studied dress design in the couture houses of Paris and now writes stories of adventure, suspense, and love. She’s a three-time Daphne du Maurier® winner and an eight-time RWA Golden Heart® Finalist. Visit her online at sharonwray.com.

Sharon lives in Northern Virginia with her husband, teenage twins, and Donut the Family Dog.