Review: We Met in Death by K.A. Merikan 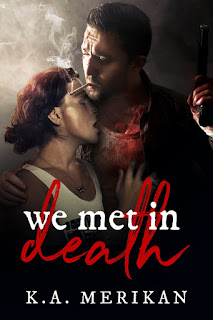 If I had describe K.A. Merikan's latest release in one word, it would be "intense", but then if you're familiar with this sisterly writing duo's work, intensity would be a given. However, there's just something special about We Met in Death that I can't pinpoint. Think of it as more of a feeling, with the emotions more nuanced amidst the chaos that threatens to knock the main characters to the ground. Dare I say that this is the authors' best work to date, and that's saying a lot since they've got quite a few already published titles under their belts. If you've never read a Merikan title before, I'm going to recommend you check this newest novel of theirs to get a taste of their writing.

He was only sixteen when he started working for a loan shark but two decades in and Robert Zidane is done, no longer able to stomach the feelings of guilt and sorrow over his job as an enforcer. On the night he decides to end his life, he ends up saving someone else's--that of twenty-five-year-old escort Nathan Edwards. Soon, Robert and Nathan are on the run from the very man who Robert's dedicated his life to for twenty years. They head to Robert's family home, hiding in plain sight with barely anyone in his hometown realizing it. But Robert seems to also be hiding from certain truths about himself, truths that he's fearful about revealing, what with the homophobia running rampant even within his family. He may have to come clean if he wants a future with Nathan.

I loved how much of a roller coaster ride of a read this standalone was! There were moments that lulled you into complacency and peaks that had you wanting to grab on to something. Robert and Nathan are an unlikely couple and there's a great deal of push and pull between them, most of it caused by Robert's own inability to be honest with himself about his sexuality. The evolution of their relationship was fascinating, and as frustrating as Robert could be with his reticence, these two were a pair worth emotionally investing in. They not only learn to trust one another but they also learn to trust themselves and their instincts and feelings. There is a fair bit of violence in this read, so if you're squeamish, tread lightly. The one hiccup? The use of British terms like lorry in a mostly American English-written book. Other than that, We Met in Death was a wholly entertaining read, one I'm giving five stars to. ♥

Purchase We Met in Death on Amazon.