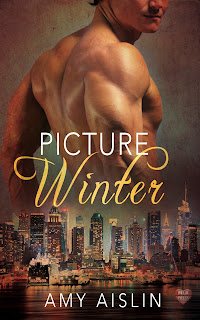 Picture Winter is the newest book from author Amy Aislin, and it's a sweet story about two men who, on paper, may not seem like the ideal fit, but could prove to be the exception to the rule. Thirty-two-year-old Elias Hood doesn't think horoscopes hold too much credence, but one of his closest friends insists he check it on a regular basis. A Capricorn and a Taurus would make the perfect pair, but two Capricorns? Not too much. So, why is it that it's twenty-six-year-old Ty Green who's got Elias's attention and has him coming back time and again for his company? They're both Capricorns, and both seem to be stuck with jobs they need rather than jobs they want. Elias is pretty much set in his ways and things in his life are going according to his self-imposed plan, but Ty wishes Elias could see that he's meant for more. Will pushing Elias out of his comfort zone lead to him pushing Ty away?

This was a really cute love story between two men who have a lot more in common than shared zodiac signs. I'm a Capricorn myself and there were things about both Elias and Ty that I both recognized and could relate to. I know all about which signs match up better with a Capricorn, whether it be personally or professionally. I went through the whole horoscope reading thing as well as the fascination with astrology when I was much younger. But don't think that this book is just about two Capricorns falling in love. No matter what similarities people with the same zodiac may share, they do have their differences, as was the case with Ty and Elias. I liked how they were able to discover better versions of themselves once they were together and coming to the realization that sometimes, all we need is a push so that we can go after our dreams. Amy Aislin satisfies once again with Picture Perfect. 4.5 stars. ♥