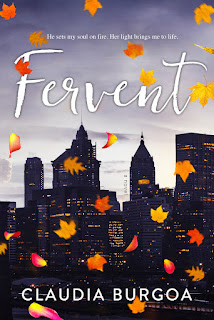 The Everharts are back! Claudia Burgoa's band of delish brothers are proving to be rather irresistible. We met the youngest of the brood, Hunter, and now, the eldest among the four boys is getting his shot at a happily-ever-after. Harrison Everhart is a former Army Ranger now working in a private security firm known for doing impeccable and highly dangerous work. He's always been highly protective of all his siblings, having promised his parents that he would always take care of them. With a job like his and with as close-knit a family as he's got, he doesn't really have time for much else. And then he meets Luna Santillan. When Harrison's best friend, Santiago Frederico, tells him about his half-sister, all Harrison has to go on is that she's an FBI agent working human trafficking cases. He certainly doesn't expect to be attracted to the woman nor that the attraction is as strong as it is. Tiago may warn him off, and maybe that's what Harrison should have done, but there's something irresistible about the beautiful, independent, and determined Luna that calls to him, and it's a fervent call that Harrison may no longer turn from.

I loved Flawed, which was formerly known as All of You, All of Me, and one of the things that I knew for certain when I read it more than two months ago was that I needed the rest of the Everhart boys to get their stories told. Voila! Now we've got ourselves Fervent, and I'm happy to report that it's just as good as its predecessor. I liked that Harrison and Luna could have very well been nothing more than cliches (he's the oldest and she's the youngest in their respective families), but I need not have worried because if it's one thing Claudia Burgoa is able to do, it's to surprise me with the direction of her stories and her characterizations. There's always such depth in her books, and this latest one follows suit. This isn't your usual "falling for your best friend's sibling" love story nor is it your typical military-type romance. Instead, this was the best of both worlds and I happily ate it all up. Both Flawed and Fervent can be read as standalones, but you won't regret reading one after the other in this untitled series (which I'm currently calling Everharts but will change once the author give a name!). Fervent receives five out of five stars. ♥

Read my reviews for the Everharts series: