Review: All of You, All of Me by Claudia Burgoa 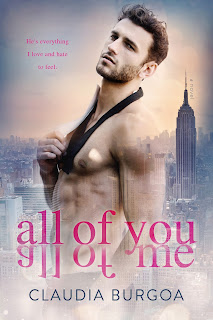 All of You, All of Me is the story of Hunter Everhart and Willow Beesley, two people who have been damaged by their circumstances. After the deaths of his parents on September 11th, 2001, Hunter has had to struggle with his agoraphobia and his issues with anxiety. He has the love and support of his three older brothers, each of them protective of Hunter, knowing everything he's had to endure since their parents were taken from them. When he meets Willow, he's quick to see how broken she is too. Suffering from borderline personality disorder, Willow is in constant limbo. Her one touchstone is her sister Hazel. Soon, however, Hunter becomes the same, even as she tries not to drag him into her chaos. Hunter's brothers recognize just how deep of an abyss their youngest could be in if he continues to fall for Willow. With so much against, will Hunter and Willow be able to get to their happy ending?

I've enjoyed many a Claudia Burgoa novel over the past couple of years, and once again, she's left me impressed with her ability to spin a yarn, and an intensely moving and heartrending one at that. All of You, All of Me is a highly complex read about finding love with the one person that seems to be drowning in hopelessness yet they're the very same person that inspires hope within you--and that was what Willow was to Hunter. There's nothing easy nor simple about their relationship other than the fact that theirs is a true and deep kind of love. I liked that Burgoa didn't bother to sugarcoat Hunter's anxieties and phobia and she did the same with Willow's BPD. This allows the reader to know all too well what these two have to contend with on a regular basis as individuals and what they have to face when they love got to them and become a couple. But hey, no one ever said love was easy.

This isn't a quick read, but it's well worth the time you put into it. I really got to know Hunter and Willow, so I was fully invested in them and in their respective and joint journeys to a happily-ever-after. Aside from the two of them, there are several other supporting characters that called my attention, namely Hunter's brothers--Harrison, Scott, and Fitzhenry--and Willow's sister, Hazel. From the ups to the downs, these four where there for their respective siblings, and now I'm curious to see where Burgoa will take them in future novels. That's the thing that I probably love best about this author--she introduces us to one main couple and then has a bunch of peripheral characters that are both engaging and endearing, to the point wherein you want more. If you've never read anything of Claudia Burgoa's before, All of You, All of Me wouldn't be a bad place to start. I'm giving this five stars. ♥