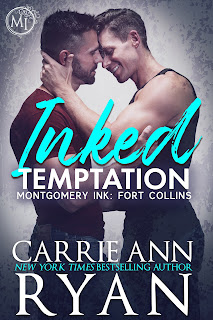 Note: An advance reader copy (ARC) was provided by the author via Give Me Books Promotions.
FINALLY! Archer Montgomery is the sibling whose story I've been itching to read ever since I started Montgomery Ink: Fort Collins series, and considering he was with a partner in the first four novels and the novella, my curiosity that had been piqued throughout had peaked even more right before this fifth and final book was released. Now, I know that Inked Temptation is marketed as a standalone, as were the previous books, but I highly suggest that you read this series in order because all five siblings and their respective partners appear in each other's books. That being said, there are no cliffhangers in any of the books, so there isn't really a continuing story line, although readers do see how Archer's previous committed relationship slowly but surely devolves.
When twenty-something Archer Montgomery crash lands atop the guy living next to the house he's currently working on--and dreaming of making his own--he quickly notices how gorgeous AND grumpy Killian Hart is. The man is thirty-something and has a wonderful canine companion named Cora, but calling him prickly would be an understatement. There's no denying, though, that Archer and Killian have a connection. But neither man is ready for anything permanent, not when the doubt and insecurities his ex-husband left him with still remain and not while Killian is still dealing with two devastating losses. However, resistance is futile with them, and giving into temptation is inevitable. Unfortunately, it seems some don't think these two deserve any happy ending.
As impatient as I may have been to finally get Archer's story,  I do think that Carrie Ann Ryan deciding to make his book close out not just the series for the Fort Collins Montgomerys, but for this particular generation of Montgomerys. This book was a reminder of what the Montgomery saga has always been about--love, family, and home. Archer and Killian were wonderful as a couple, but getting to that happily-ever-after of theirs was not easy. My heart broke when Killian's back story came to light, and I so empathized with Archer feeling lost, both personally and professionally. I loved how these two came together, and while I adored seeing how loving and supportive the Montgomerys were, Cora and Penny were scene-stealers. Five stars for Inked Temptation.
-------------------------
Read my reviews for the Montgomery Ink: Fort Collins series: