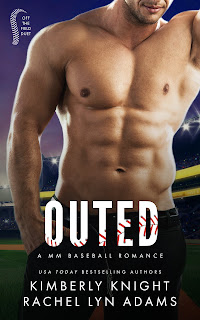 Note: An advance reader copy (ARC) was provided by the authors via Give Me Books Promotions.
Outed is the conclusion to the Off the Field duet from Kimberly Knight and Rachel Lyn Adams. This picks up right where Traded left readers hanging, which basically tells you that these books MUST be read in order because of the continuing story line. Aron Parker and Drew Rockland may not have had a whole lot of love lost between them prior to them being on the same team, but now that they're both playing for the Colorado Rockies, they're very much up close and personal with each other. But this is more than just a matter of lust and hooking up; Aron and Drew have fallen in love. The need to keep their relationship under wraps was an important one, in hopes to keep everyone's focus on bringing the wins for their team. But hurdles abound, and if Aron and Drew aren't careful, being traded doesn't sound as bad as being outed before either one is ready for it.
The four-month wait for this book left me anxious, but the authors made it worthwhile  nonetheless, thanks to a strong story that I was invested in and two main characters who had depth and continued to evolve from the first book to this second one. While a happily-ever-after was expected for Aron and Drew, their journey towards it was most certainly not an easy one, what with a homophobic teammate, a vindictive ex, and the very real possibility of their relationship being brought to light without their permission. Now, that all sounds like heavy stuff, but there was a lot of good that happened as well, and these two truly did get the HEA that they so deserved. Outed gets a 4.5-starred rating.
-------------------------
Read my reviews for the Off the Field series: