Review: The One Who Loves You by Pippa Grant (Tickled Pink #1) 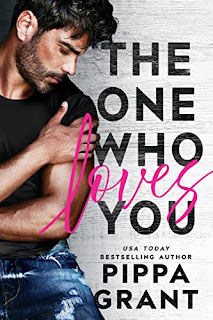 Note: An advance reader copy (ARC) was provided by the author.
Oh, my Oprah! Pippa Grant has a new series, people, and the first book had me tickled pink! The One Who Loves You is the first novel in the Tickled Pink series, and it was like The Beverly Hillbillies but the other way around, i.e. the rich folks head for a small town. When thirty-year-old Phoebe Lightly's grandmother has a near-death experience, Phoebe doesn't quite expect it to lead to their family moving from New York's Upper East Side to Tickled Pink, Wisconsin. Suffice it to say that her Louboutins were not made for the more...rustic surroundings of the quaint town with its quirky residents. Teague Miller, however, is more about grump than quirk. The thirty-seven-year-old single father of a teenage daughter prefers to spend his time fishing than to kowtow with some pampered heiress. It's clear that Teague believes Phoebe doesn't belong in Tickled Pink, so maybe he'll help her to get back to the life she knows. But the more time she spends in that small Wisconsin town, the more she wants to stay; and the more she's around Teague and his daughter and the townsfolk, the more Phoebe hopes that maybe, just maybe, she belongs.
Pippa Grant's brand of quirky romantic comedy soothes my soul and if I happen to be reading something she's written on a less than stellar day, it's like that bit of light and laughter that I need--a pick-me-up of sorts. With Phoebe and Teague's story, the town itself was as important as the cast of characters, almost as if Tickled Pink was a character, too. It was interesting to see how Phoebe and the rest of the Lightlys would try and assimilate all things Tickled Pink and became a part of the town rather than mere residents. Our main characters also seemed to have a heck of a lot of hurdles to get through since they didn't seem to have anything in common, but I always say that people tend to have more in common than you'd think or that they'd care to admit. I enjoyed the humor and the romance was quintessential Pippa Grant, and I definitely have no qualms returning to the town of Tickled Pink in December! Five stars for The One Who Loves You.
Release Date: 12 July 2022
Date Read: 01 May 2022
Learn more about Pippa Grant.
Pre-order The One Who Loves You on Amazon.