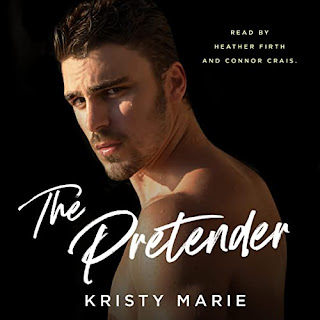 Note: The audiobook was provided by the author.
When the eBook was originally released in late 2020, it had the title of Subscriber Wars, but it was retitled The Pretender earlier this year, and now, this second book in the 21 Rumors series from Kristy Marie is finally out in audio, and it was an entertaining eight-hour treat! Narrated by Heather Firth and Connor Crais, this is enemies-to-lovers romantic comedy is about Valentina Lambros and Sebastian Carrington. There was a point in time when these two were actually friends, but there hasn't been a heck of a lot of love lost between them in a long time. So imagine Valentina's surprise when Sebastian suggests they pretend to be in a relationship in hopes of winning a million dollars and bringing in potential subscribers. Pretending to be in love with someone you can't stand is difficult enough; what more when you find yourself actually falling for that very same person?
I thoroughly enjoyed revisiting Bash and Vee's story, Bash being Sebastian and Vee being Valentina! Kristy Marie's writing brought the romance and the comedy, but there's also a pinch of angst added in, and that tiny bit brings an extra bit of flavor to make an already entertaining story even more enticing. Neither Heather Firth nor Connor Crais are new to me, and they certainly brought Vee and Bash to life. Considering the fact that I actually listened to this entire audiobook in one sitting, I guess it pretty much shows that not only did I love listening to it, but that it was a great way for me to spend a Saturday. While this is a part of a series, it can still be listened as a standalone; although truth be told, I'm now seriously considering actually listening to the first and third audiobooks as well since I adored the eBooks! Five stars for the story penned by Marie and five stars for the narration from both Firth and Crais, which makes averaging the rating for this easy peasy. Five stars for The Pretender!
Date Listened to: 06 July 2022
Learn more about Kristy Marie.
Learn more about Heather Firth and Connor Crais.
Purchase The Pretender on Audible.