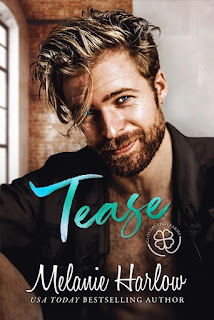 Note: An advance reader copy (ARC) was provided by the author.
The fake relationship trope may not be my favorite, but there was no resisting the spin that Melanie Harlow put on this third book in the second generation of Cloverleigh Farms series. Tease is a friends-to-lovers romance featuring besties Felicity MacAllister and Hutton French, with the former being the daughter of Mack MacAllister and step-daughter of Frannie MacAllister née Sawyer from Irresistible, the OG of the Cloverleigh Farm series. Felicity and Hutton have been the best of friends since they met in the seventh grade. All these years later, their friendship has remained, even though life has taken them in different directions. She's hoping for more followers for her blog, The Veggie Vixen, while also trying to attract more clients for her new vegetarian catering business; he's a billionaire thanks to co-founding HFX, a cryptocurrency exchange. When she finds herself face-to-face with the mean girl from their high school during their ten-year reunion, she fibs and announces that she's engaged to none other than Hutton. She may have been able to convince her socially adverse best friend to agree to be her fake fiancé, but for how long will she be able to convince herself that her feelings aren't real?
A fake relationship that involved real feelings, albeit secret ones, centered around two best friends? Yes, please, although I'm super picky when it comes to anything that has to do with the whole fake scenario. I liked both Felicity and Hutton, and I could appreciate their anxieties and how they managed them. Their friendship was one that stood the test of both time and distance, and I understood that because some of my closest friends and I may not speak on a regular basis, but we keep in touch and when we're together, that bond remains. It was clear how much Hutton adored Felicity, and goodness, but all his gestures felt like grand ones. These two deserved each other, and they also had strong support systems courtesy of their respective families. There were a couple of things that I wish had been resolved more decisively, and I wouldn't have said "no" to delving into certain revelations, but I did enjoy the book overall, what with each visit to Cloverleigh Farms making me want to keep coming back--and I definitely will! Four stars go to Tease.
-------------------------
Read my reviews for the Cloverleigh Farms: Next Generation series: