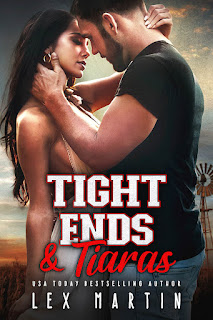 Note: An advance reader copy (ARC) was provided by the author via Give Me Books Promotions.
The Varsity Dad Dilemma was one of my favorite reads of last year, so I was giddy with excitement when Lex Martin announced that she was releasing the second book in her Varsity Dads series this month. Tight Ends & Tiaras is a standalone, although there are brief cameo appearances from Gabriela Duran and Rider Kingston. This is Sienna Cruz and Benjamín Rodriguez's story, the former being Gabby's best friend and the latter Gabby's older brother and Rider's former teammate. When Ben's ex leaves him gobsmacked with her announcement that the baby she had two years ago turns out to be his and not to guy she cheated on him with, Sienna offers him and his toddler daughter the extra room in her house. She also agrees pretend to be his girlfriend in order to dissuade his ex from thinking they can get back together. For these incoming seniors, life is about to get very interesting as they go from friends to roomies to fake lovers to...more?
I'm super picky when it comes to romances that employ the whole fake relationship angle, but Lex Martin took Sienna and Ben's story and made that just one aspect of what was a well-rounded and endearing tale of love, friendship, and family. I loved seeing the evolution of Sienna and Ben's relationship. While they may have been more than mere acquaintances, they truly became friends in this book while developing into lovers and then far more than either of them may have anticipated. Aside from the romance, there was also enough football to satisfy my need for the sport aspect of the story, and the fact that it included some drama within the team made it even more interesting. There was also some angst courtesy of Sierra's and Ben's family woes. Kudos goes to the support system that Ben has when it comes to his closest friends, Olly and Johnny, and I'm certainly looking forward to the former's book releasing next year. The one reason why I hesitated to give this five stars, though, was it was kind of murky why Ben's ex was as wishy-washy as she was with regards to getting back together with Ben, not that she deserved that second chance. Still, I adored Tight Ends & Tiaras, which receives 4.5 stars.
-------------------------
Read my reviews for the Varsity Dads series: