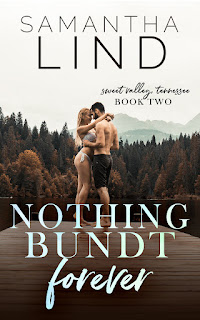 Note: An advance reader copy (ARC) was provided by the author via Wildfire Marketing.
Nothing Bundt Forever is the second book in the Sweet Valley, Tennessee series from Samantha Lind. The first book, Nothing Bundt Love, was rather cute, so I knew a return trip to this fictional small town was inevitable. This can be read independently of the first book, although Lacey does appear there, what with her being Harper's cousin and all. With Harper having found love and deciding to move to California to be with Nathan, Lacey will be at the helm of their bakery, Nothing Bundt Dessert. Baking was what brought her some semblance of peace and purpose when the troubles her ex-husband we weighing on her. With two kids to care for, she doesn't have much time for anything else. And then Garrett came along, and she wondered if this was her second chance at forever.
This was a really quick read, with the story pretty much flowing at a fast clip. I wouldn't necessarily call this insta-love, but there was a definite connection between Lacey and Garrett, both taking notice of each other. This is also mostly drama-free, with nothing major in terms of conflict other than a wee bit of hesitation on Lacey's end, but then that's not all that surprising considering what happened in her marriage. All in all, Nothing Bundt Forever was an okay read, but it did leave me wanting a tad. I'm also not entirely sure if there's a third book in the offing because there weren't any other standout supporting characters that had me wondering what their stories were. This gets 3.5 stars.
Release Date: 27 July 2022
Date Read: 22 July 2022
Learn more about Samantha Lind.
Purchase Nothing Bundt Forever on Amazon | Apple Books | B&N | Kobo.