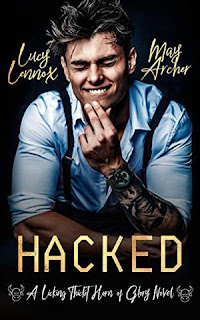 Note: An advance reader copy (ARC) was provided by the authors.

This kiss needed to stop.

It was ridiculous. Inappropriate. Outrageous.

Possibly the stupidest thing I'd ever done.

But, I thought as his fingers stroked over my neck and my gut tightened, it was also turning out to be the most enjoyable.

I am a smitty kitty, which is far cooler than a smitten kitten but I'm still partial to a happy puppy, because I've just found my favorite book in Lucy Lennox and May Archer's Licking Thicket: Horn of Glory series! Talk about saving the best for last, the mix of an enemies-to-lovers story in a romantic suspense series with loads of wit and humor and just a smidgen of angst had me giddy with excitement. Hacked is Jasper Huxley and Kevin Rogers's story, both tech wizards and masters of HOG (although who tops the other is a whole different conversation...and not the dirty kind). If you've been a reader from the get-go, you'll remember that these two have had the whole rivalry thing going on for quite a while. Welp, the wait is over because we finally get their story and it's totally fab!
Thirty-year-old Jasper Huxley is Champion Security's computer security infiltration specialist for a reason. He's damn good at what he does; so naturally, he isn't exactly thrilled whenever a certain someone makes him look bad. Kevin Rogers is twenty-four and has earned his reputation for being pretty much the tech genius that he is. Inasmuch as Hux and Kev like to push each other's buttons, now they need to work together on a real-life quest to figure out who the bad guys are and bring them down. Neither thought,  though, that they'd get their hearts hacked by the person they least expected: each other.
The tension, people! Gah! I loved the back and forth between Hux and Kev because you could see underneath it all was this palpable connection that demanded to be explored.  I adored these two together, but then I was shipping them from the moment they crossed paths in the series. And Rodrigo?! I confess that I'm partial to dogs when it comes to pets in romances, and that's followed not so far behind by cats, but then here comes Rodrigo, and I swear, he made me miss my first pet, a white rabbit named Emy. Toss in Carter and Riggs and Quinn and Champ, plus the rest of the Champion Security crew and the townsfolk of Licking Thicket, and well, I was one smitty kitty! Five-plus stars for Hacked!
------------------------
Read my reviews for the Licking Thicket: Horn of Glory series: