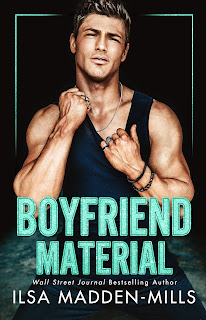 Note: An advance reader copy (ARC) was provided by the author.
Ever since I read Boyfriend Bargain in 2019, I've been hoping that some of the supporting characters from there would get their own stories. If you were like me, then rejoice because Ilsa Madden-Mills has just released the second book in her now-titled Hawthorne University series! Boyfriend Material, which reads quite well as a standalone, is the story of Julia Lauren and Eric Hansen. Fans and readers of Madden-Mills's work will recall coming across these two from the series starter, Julia being Sugar Ryan's best friend and Eric being Z Morgan's closest friend and teammate. Theirs is a second-chance romance, and while it is pretty lighthearted, it does have a fair bit of angst thanks to family drama.
Julia Lauren has learned to roll with the punches life has dealt her, refusing to let her circumstances knock her out. She does whatever she has to, taking everything day by day. She doesn't need anyone to save her, especially not when it happens to be Eric Hansen--the same Eric Hansen who used her then promptly broke her heart when they were in prep school three years ago. They may both attend Hawthorne University, but she's made sure to avoid him at all costs. When he steps in and rescues her from an unsavory character, Eric can't help but to go further, helping her in a way she never expected. He knows he hurt her in prep school, but maybe this is his new shot at finally getting it right.
It should go without saying that I was super eager to get my greedy hands on this book, and I admit that my expectations were quite high considering how much I adored Boyfriend Bargain. Sugar and Z were always going to be a hard act to follow, but I think that Julia and Eric did rather well. They had a definite connection, and I liked seeing them forge a strong friendship with an underlying layer of mutual attraction that was begging to be re-explored. These two certainly had family issues that were weighing them down. I appreciated how Eric showed Julia it was okay to accept help while she reminded him it was okay to chase his own dreams. All in all, Boyfriend Material was a four-starred read.
-------------------------
Read my reviews for the Hawthorne University series: