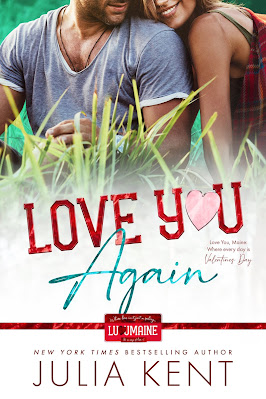 Love You Again
(Love You, Maine #2)
by Julia Kent
Release Date: July 19, 2022
About Love You Again
An unexpected rescue rekindles an old romance between a single dad widower and a woman caught in a small town scandal that made her flee the one place where she belongs. Can a second chance at first love end in a happily ever after?
Luke Luview has given up on love. Finally ready to let go of his late wife’s clothes, the grieving small-town police officer and single dad thinks he’s hearing things when he opens the charity box door. Who knocks from the inside of a donation bin?
The raccoon he assumes is in there turns out to be way prettier – and very familiar. Rescuing the first girl he ever kissed means life has dealt him a wild card with Kylie Hood, his late wife’s best friend who left town suddenly fifteen years ago under a cloud of scandal.
When Kylie shows up at his house the next morning with a thank you gift and a dazzling smile just as his nanny quits on the spot, he is stuck.
And this time, Kylie rescues him.
Kylie Hood will never depend on a man again. Dumped by her boyfriend and fired by his parents from her children’s programming job at their ski resort in rural Maine, she hits rock bottom while throwing out her ex’s clothes — along with her phone and car keys.
Being rescued by Luke Luview, of all people, is a gift and a curse. The boy she once loved is now all grown up, everything her ex wasn’t – and absolutely off limits.
Accepting his offer to be his temporary nanny while she job searches in New York City, Kylie falls hard for his sweet daughter, and even harder for Luke. A clause in her employment contract means they can’t fraternize, but fate has other plans, and forbidden fruit is twice as sweet.
As the town she reluctantly left years ago accepts her more and more, and Luke makes it clear he wants ta second chance with her in their close-knit community, Kylie has to decide: an exciting new career in Manhattan on her own, or an instant family and a sense of belonging in her small hometown?
And as Luke wrestles with the pain of being left behind by his wife’s accidental death, he has to balance his responsibilities to his daughter with his own needs. Needs he’s ignored for far too long.
Needs only Kylie can meet.
But not if she leaves.
Can Luke and Kylie rekindle their first love and find a new future together in a place where love conquers all?
If you’re looking for a fun read about first kisses and second chances, featuring a hot single-dad police officer and his accidental nanny, set in a small town in New England, with a golden retriever named Jester, a heroine whose dream in life is to run a fairy camp, and a hero who wants to build a place where everyone belongs–then this is your book.
Grab a cup of coffee or tea, and maybe some edible glitter, and get your happy meter ready as you read the second book in the Love You, Maine series–where love isn’t just a feeling… it’s a way of life.
✓Standalone
✓Slow burn
✓Single dad widower
✓Nanny/police officer
✓Second chance
… and a golden retriever named Jester 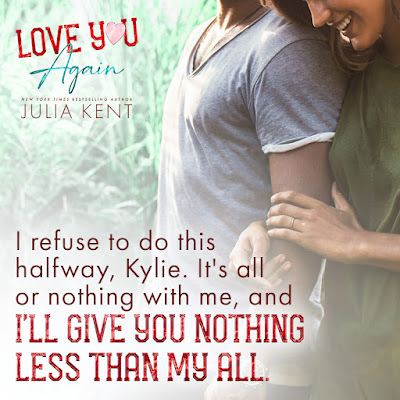 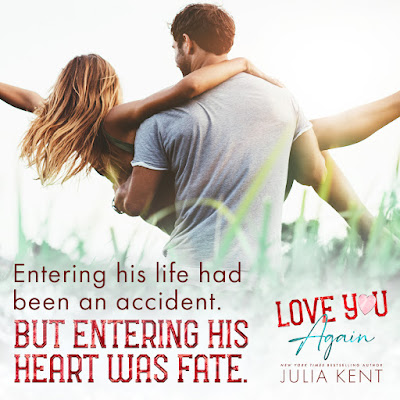 An Excerpt from Love You Again
By the time he walked back into the living room, Kylie was petting a very happy Jester, Harriet was munching on a small plate of cheese and apple slices, and the first girl he’d ever kissed gave him an evaluative look that made him do a double take.
“I’ll stay with her,” Kylie chirped. Yeah, chirped. She sounded like a freaking bluebird of happiness.
He stared at her. “You’ll what?”
“I’ll stay with her.”
“No. Thanks, but no way. You’re a stranger.”
“I’m Red Cross certified in CPR and first aid. I have a master’s degree in education and am a licensed teacher. And I’m not a stranger.” A blush formed on the tips of her ears as she looked up at him in a way that made Luke remember the past, a pier, a pretty girl, and a perfect moon.
He recalled that blushing-ear quirk from years ago. Kylie hadn’t changed one bit. The taste of her cinnamon gum from that kiss on the pier at camp made his mouth water.
“No. You’re not a stranger. But…Harriet doesn’t know you. And you’re not exactly trustworthy.”
“Excuse me?”
“You got stuck in a charity donation box on Thanksgiving night, Kylie. I have a right to question the executive functioning skills of someone who does that.”
“It was an accident! And you’ve got it all backwards, Luke. The fact that you found me in that donation box is a testament to my resourcefulness! Not a reason to question my abilities.” 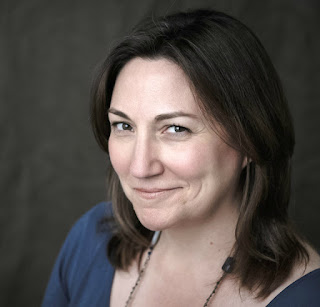 New York Times and USA Today bestselling author Julia Kent writes romantic comedy with an edge. Since 2013, she has sold more than 2 million books, with 4 New York Times bestsellers and more than 21 appearances on the USA Today bestseller list. Her books have been translated into French, German, and Italian, with more titles releasing in the future.
From billionaires to BBWs to new adult rock stars, Julia finds a sensual, goofy joy in every contemporary romance she writes. Unlike Shannon from Shopping for a Billionaire, she did not meet her husband after dropping her phone in a men's room toilet (and he isn't a billionaire she met in a romantic comedy).
She lives in New England with her husband and three children where she is the only person in the household with the gene required to change empty toilet paper rolls.
Connect with Julia
Website | Facebook | Twitter | Instagram | Goodreads | BookBub | Newsletter