Review: The Anti-Fan and the Idol by Rachel Van Dyken (My Summer in Seoul #1.5) 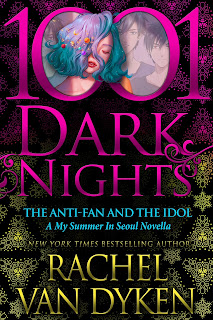 Note: An advance reader copy (ARC) was provided by 1001 Dark Nights Press.
We're back in the land of K-Pop and where imagination is encouraged as 1001 Dark Nights Press releases The Anti-Fan and the Idol, a standalone novella in the world of My Summer in Seoul. This time around, Rachel Van Dyken gives readers the story of Korean-American Ah-Ri, an aspiring performer who's got the singing chops and dance moves but doesn't necessarily fit into the mold set for her in the world of K-pop. Over the past two years, she's tried to do what's expected of her, but she's only got six months left before scheduled college entrance exams to show she belongs under the bright lights of stardom as the next deserving idol. She doesn't quite expect to find her saving grace in the form of two famous idols, both of whom she most definitely was not a fan of. Ryan and Haneul are on a quest to launch a co-ed group, and with one female member already locked down, they need one more--they need Ah-Ri. But their short history mired in animosity could spell disaster...or it could very well be the vehicle that'll make all of their dreams come true.
This was a highly enjoyable quick read, and you don't necessarily need to read My Summer in Seoul in order to fully get what's happening (but go read the full-length novel anyway because it's awesome). While the official blurb hints at a love triangle between Ah-Ri, Ryan, and Haneul, there really isn't much of one to speak of. Yes, Ah-Ri has intense feelings for both Ryan and Haneul in the beginning, but those feelings aren't exactly romantic ones considering the way they treated her when they were all aspiring to become K-pop idols. This is Ah-Ri's story, and it's Ryan that she mostly shares it with, at least in terms of the whole enemies-to-lovers romance part. There's also seeing her strive to make her dreams come true as part of the co-ed group Ryan and Haneul are desperately trying to get together in time for showcase day. There's a hint of angst brought on by something in Ryan's life, but otherwise, this was a fairly lighthearted read with some heated moments between all of the strong-willed main characters. The Anti-Fan and the Idol gets 4.5 stars.
-------------------------
Read my reviews for the My Summer in Seoul series: