Review: My Summer in Seoul by Rachel Van Dyken 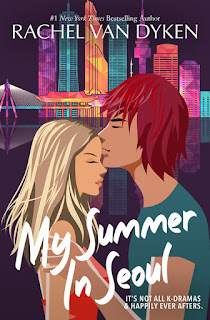 What was happening right now?

Was I truly being punished for loving someone?

Was I getting punished for loving the wrong someone?

I admit it: I was once a K-pop fan. Rewind to over a decade ago, when I was an ELS (English as a Second Language) teacher to Korean students of varying ages. The ones I was closest to taught me a thing or ten about all things Korean pop music and television dramas. So, when I see how countless people getting addicted to K-dramas and K-pop, I can't help the smile on my face. Been there, done that, and yes, sometimes, when a drama holds my attention for longer than an episode or a song is catchy and has me shimming my shoulders and swaying my head side to side, that addiction gets ahold of me once again. When Rachel Van Dyken announced she had a K-pop-inspired standalone in the works, I had a feeling I'd be taken over again. That itch started with the cover reveal, and it only got more irresistible the moment I read the first few pages. By the end, I was smitten, and down the rabbit hole I went, re-listening to the K-pop songs I once sang to even when I butchered the lyrics and badgered my students to translate for me while bookmarking the K-dramas I swooned over years ago, saving them for binge watching over a few weekends.
The Summer in Seoul is the story of Grace Park, a twenty-two-year-old Korean American invited by her uncle to a summer internship at his record label in Korea. It's an opportunity of a lifetime, but Grace quickly realizes that she's a fish out of water in more ways than one. She knows one word in Korean, and while she may be half Korean, the Koreans that surround her in her father's native land don't do anything by halves. When she finds herself working with the most popular band in K-pop, SWT, it's clear that they took one look at her and found her wanting. Unlike a K-drama, the drama that surrounds her courtesy of her job and SWT's  five members is overwhelming. With her heart on the line, Grace learns happily-ever-afters are not guaranteed.
Where do I even begin with this book? There was a lot of it that I easily empathized with. My nieces and nephews are Filipino Americans, and because they live in the US, it's the American culture they're inundated with. I'm happy, though, that their moms, i.e. my sisters, teach them bits of Philippine history and culture, and that their dads encourage it. So, I could see how Grace having been brought up in all things American and having lived her entire life in the US struggled as much as she did when she was in Korea. But I also admired her because she did open herself up to her Korean heritage and life there, even if it was only for the summer.
This story may only take place over a short period of time, but so much happens and none of it are what I would consider "filler". I loved Grace's journey. She discovered parts of what made her who she is and reinforced the knowledge that she was far more capable than maybe other people gave her credit for. Yes, she was a wee bit lost, but she found her way. I'm not saying that the going forward was going to be free of hurdles and turns, but she did gain a great deal of self-belief and self-confidence. I don't want to mention much about who she's paired with in this story other than to say that she does get they do get their happy ending and that I hope the rest of the guys in SWT get theirs as well, whether it be in book form or in the anticipated television adaptation, or why not both?! My Summer in Seoul is a five-plus-starred must-read.
Release Date: 14 December 2021
Date Read: 11 December 2021
Learn more about Rachel Van Dyken.
Pre-order My Summer in Seoul on Amazon | Apple Books | B&N | Kobo.