Review: The Virgin Scorecard by Lauren Blakely (Rules of Love #4) 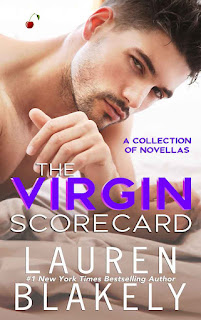 Note: An advance reader copy (ARC) was provided by the author.
Lauren Blakely's newest addition to her Rules of Love consists of not one, not two, not three, not four, but FIVE stories. Yep, you read that right. Each one features a different couple, but they're all tied together by two things: baseball and stand-up comedy. That's a strange pairing, I know, but trust me, it works. I enjoyed reading every single one of these stories, all of which are quick reads with varying lengths and have the same timelines, more or less.
Mr. Right Now is a second-chance romance with Shane Walker, aka Shakespeare (because he's English), and Clementine Rose. Shane's the new closer for the San Francisco Dragons, and Clem was the girl from high school who got away. This is the longest among all the stories, and it follows the first three books in the series with the virgin theme. I loved the flirty and dirty banter between Shane and Clem. This fab story kicked things off nicely.
Captain Romance is a forbidden romance with Sullivan Fitzgerald, pitcher for the San Francisco Cougars, and Erin Madison, a reporter whose beat includes writing about the Cougars. Sullivan's had a thing for Erin for quite some time, but Erin fears what getting involved with him could mean for her career. This is the second longest story, and has a virgin main character as well. I enjoyed seeing these two spark up a friendship and then far more.
Kiss Your Tulips is a short story with Drew McBride, catcher for the San Francisco Dragons, and Frankie (last name not mentioned), florist and owner of Kiss Your Tulips. He needs flowers for a woman who means the world to him, but he's all flirty and charming with Frankie. So, what gives? I'm not going to tell you, but this story was super cute, and had me grinning from ear to ear. This is the fourth longest story but brings the rom and com.
Limo Bang is a short story with Marlow Winters, owner of the San Francisco Dragons, and Hudson Tanner, owner of the San Francisco Cougars. In short, these two are rivals, but they also happen to be really into each other. So, what's a bit of betting and hooking up between rivals, right? I liked these two together because they were absolutely perfect for each other and gave as good as they took. This fun-filled and steamy story is the third longest one.
Dog Fishing serves as the epilogue for this entire collection and is about Nova, who has her own popular podcast and has an adorable dog, and Matilda, a stand-up comedienne with a strong following and has been dog-fished in the past. As short as this was, I quite liked these two women who shared a connection, and they earn bonus points because they both love dogs. I do wish this bit were longer but what was there was really enjoyable.
All in all, I liked all five couples and their stories. Lauren Blakely delivers on the flirty romance she's known for, as well as the light-hearted comedy that elicits a smile or laugh. With five stories about a close-knit group of four gal pals, three professional baseball players, two rival team owners, and one hilarious comedienne, plus cameos from other Rules of Love and Men of Summer characters, The Virgin Scorecard definitely scored with me. 4.5 stars.
Release Date: 17 December 2021
Date Read: 15 December 2021
Learn more about Lauren Blakely.
Pre-order The Virgin Scorecard on Amazon | Apple Books | B&N | Kobo.