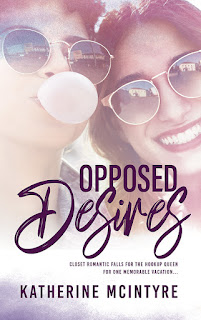 Note: An advance reader copy (ARC) was provided by the publisher via Other Worlds Ink.
Opposed Desires is the second book in the Rehoboth Pact trilogy penned by Katherine McIntyre and published by Hot Tree Publishing. This can be read independently of the series starter, Confined Desires, but there are certain characters who recur throughout the series, so if you're like me and have a preference of knowing back stories and the like, then I recommend that you read the books in order. Again, though, doing so isn't an absolute necessity.
Fitness trainer Aubrey Moore has a reputation for preferring hookups to anything close to commitment. On the other hand, bar owner Selina Beckett isn't into one-night stands and flings. Selina's made it clear that she loathes Aubrey, so imagine the awkwardness when they end up being neighbors during a week-long vacation with their respective friends. When Selina witnesses Aubrey in the midst of a personal crisis, she sees a softer side to her. The two of them begin to recognize the connection between them and agree to short-term thing while on vacation, but will a week ever be enough?
While the first book in the series had a friends-to-lovers feel to it, this second one is more enemies-to-lovers. There was some definite chemistry between these two, even if things were a wee bit more antagonistic than affectionate in the beginning. Aubrey and Selina knew how to push each other's buttons, but they also pushed each other beyond their self-imposed boundaries, which, in turn, allowed them to see the possibilities for themselves as a couple. Opposed Desires is a 4.5-starred addition to the Rehoboth Pact series.
Date Read: 11 December 2021
Learn more about Katherine McIntyre.
Purchase Opposed Desires on Hot Tree Publishing | Amazon | Apple Books | B&N | Kobo.