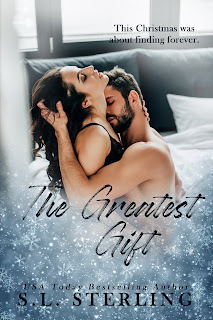 Note: An advance reader copy (ARC) was provided by the author.
The Greatest Gift is a holiday romance, and it's my first read from S.L. Sterling. This is a standalone--or at least I think it's a standalone and it read that way to me--that features a friends-to-lovers story, but with a bit of a twist. Tess was set to marry her fiance of two years but when he calls of the wedding after declaring that he's fallen in love with someone else, she's devastated. Even as everything is cancelled, it's the honeymoon trip to Paris that her mother and best friend encourage her to push through with. Tess invites Maddox, her ex's best friend to go on the trip with her, and she's happily surprised when he agrees. They have ten days together; it'll take less than that for things to change between them, but is it something that'll last?
It took me a little over an hour to read this, and it was a fairly entertaining romance. It took a bit for me to warm up to both main characters, and that was due in large part to the fact that both Tess and Maddox let Derrick, Tess's ex-fiance and Maddox's best friend, get away with A LOT, although more the former than the latter since at least he spoke up and called Derrick on his behavior and extracurricular activities. My favorite thing about the book, though, was the actual trip to Paris, with the author making everything Tess and Maddox saw and did there sound quite enticing. Overall, I appreciated that Tess finally realized she deserved better and that what she had with Maddox was worth it. The Greatest Gift receives 3.5 stars.
Release Date: 17 December 2021
Date Read: 17 December 2021
Learn more about S.L. Sterling.
Purchase The Greatest Gift on Amazon | Apple Books | B&N | Kobo.