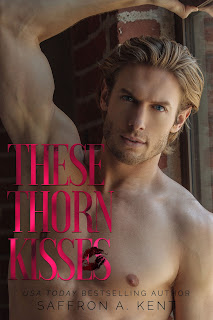 Note: An advance reader copy (ARC) was provided by the author via Wildfire Marketing Solutions.
After the cringe-worthy disappointment that was A Gorgeous Villain, I was anxious about the third St. Mary's Rebels novel. I loved the first book, the second one not so much, but Saffron A. Kent has bounced back because this third book held my attention and Conrad Thorne earned my affection by the end. Bronwyn Littleton wasn't too bad either, so I'd consider this book a win.
When I read the blurb for These Thorn Kisses, I had to pause because it sounded a wee bit familiar. The first book in the St. Mary's Rebels series, My Darling Arrow, also had the main male character who was older and was the school's soccer coach plus there was the whole unrequited love angle. The bottom line, though, is that both books are NOT carbon copies of each other.
Thirty-two-year-old Conrad and eighteen-year-old Wyn, he being a teacher and she being a student at St. Mary's, are what'd be considered forbidden. There was also the whole grumpy guy who's the guardian of his younger sisters, one of whom is Wyn's best friend. Wyn's dream guy is Conrad, which isn't too bad. Except...he's got a dream girl of his own--one he's in love with.
If you're familiar with this author's writing, then you know that relationships that are off-limits is her jam, and I've seriously loved quite a few of her stories. Conrad and Wyn's may not have been a top favorite, but it's one that I liked. These two became each other's life changer, and I'm a sucker for a well-earned happy ending. Four stars go to These Thorn Kisses.
Release Date: 07 December 2021
Date Read: 06 December 2021
Learn more about Saffron A. Kent.
Pre-order These Thorn Kisses on Amazon | Apple Books | B&N | Kobo.