Audio Review: More Than Enough by B. Harmony, narrated by Dan Levy (Enough #1) 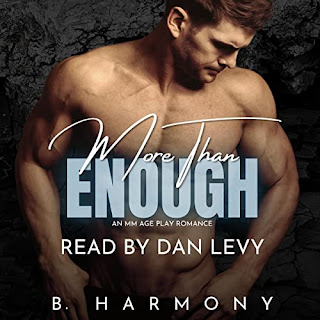 Note: The audiobook was provided by the author via Gay Romance Reviews Audio Team.
B. Harmony is one of those authors whose writing I can easily connect with. Experience has shown that Harmony's stories and characters combine both entertainment and endearment, the latter making it easier to become emotionally invested. With More Than Enough, the first in the author's Enough series, I get to listen to my very first audiobook from Harmony and am introduced to the vocal stylings of Dan Levy, a new-to-me narrator. After nearly seven and a half hours, suffice it to say that I fell in love with the story all over again, having read it when it was released a couple of months ago, and have found a great narrator I certainly wouldn't mind listening to several times over.
More Than Enough is an M/M age play romance featuring Eric Hutton, forty-three and an administrative support specialist, and Sawyer Price, twenty-eight and a former Marine who was medically discharged. After his last failed relationship, Eric contemplates giving up the little lifestyle. With some encouragement from his best friend, he goes to an exclusive club thinking that this may be a fitting end to his quest to find his Daddy. But then he meets Sawyer, and there's an instant connection that fills Eric with hope. Will their age difference, Eric's insecurities, and Sawyer's injury and PTSD prove to be insurmountable hurdles or will they be more than enough for each other?
I've read and listened to quite a few age play romances, mostly M/M, and flipping the proverbial script, i.e. having the Daddy younger than the little, was more in the minority than the usual older Daddy and younger little, which is why I look forward to stories like Sawyer and Eric's. I'm curious to see how everything will go between them, and how their relationship will handle the expected and unexpected obstacles. Aside from the main characters, Sawyer's and Eric's best friends, Aaron and Cody, respectively, were standout peripheral characters, and I can't wait for these tow and their own journey to their happily-ever-after. 4.5 stars for the story and ditto for the narration of More Than Enough. ♥
Date Listened to: 26 December 2021
Learn more about B. Harmony.
Learn more about Dan Levy.
Purchase More Than Enough on Audible.