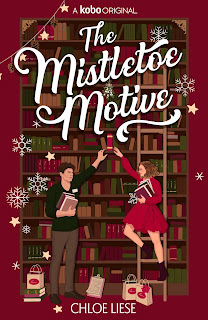 Note: An advance reader copy was provided by Kobo Originals via Valentine PR.

Why is this the best kiss of my life? Why did it have to be him?

Don't you love it when a new-to-me author leaves you gobsmacked with their amazing storytelling and makes you wonder why the heck you're only discovering their writing now? Welp, that's what happened with Chloe Liese and her holiday romance, The Mistletoe Motive, which is a Kobo Original and exclusively available on Kobo. Being a fan of the 1940 cinema classic The Shop Around the Corner (which was based on Parfumerie, a Hungarian play), I've loved remakes of the film, specifically, In the Good Old Summertime (1949) and You've Got Mail (1998). I've also read romance novels that were inspired by the idea of two people falling in love via correspondence with no idea that the other person is the same one they cannot stand being around.
The Mistletoe Motive is the story of Gabriella Di Natale and Jonathan Frost, both of whom are employed as co-managers at Bailey's Bookshop. For the year they've been working together, Gabby and Jonathan have tolerated each other as best as they can, but that's easier said than done. When the Baileys inform them that the bookshop's finances are in dire straits and that measures needed to be taken to keep the place afloat, it dawns on the two managers that one of them could very well lose their position. With neither one eager to give way to the other, a bargain is struck: the manager with the highest sales at year's end would stay on, and the other...well, would resign. Getting rid of the guy she dislikes would be such a bonus...that is, until they spend more time together, and Gabby spies a warmer side to her Mr. Frost.
I penciled this book onto my list of favorite reads for 2021 when I was halfway through, barring anything catastrophic happening in the second half. Once I was done, Gabby and Jonathan's story remained sitting prettily on the list, and I've been left immensely impressed by Chloe Liese. I loved her main characters--from the back and forth and the tension simmering between them, Gabby and Jonathan are among my most unforgettable fictional couples. Gabby being on the spectrum and Liese being neurodivergent herself were just two of the noteworthy aspects of this book. Add to that endearing characters and a heartwarming story filled with romance and wit, and The Mistletoe Motive is a five-plus-starred must-read!
Release Date: 01 December 2021
Date Read: 27 November 2021
Learn more about Chloe Liese.
Purchase The Mistletoe Motive on Kobo.