Review: Not Just for Christmas by JJ Harper 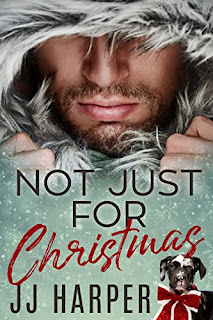 Note: An advance reader copy (ARC) was provided by the author via Gay Romance Reviews ARC Team.
Not Just for Christmas is a standalone M/M holiday romance penned by JJ Harper, and it features two men brought together by an abandoned and abused puppy. Okay, that's oversimplifying it, but that doesn't mean that it isn't a good read. Tragedy leads Hunter Wiley to leave behind his life as a successful news reporter in London to try and grieve and heal in a small village in South Wales. For the next two years, the solitude and remoteness has provided some semblance of refuge, even if it means yet another Christmas spent alone. But that all changes when he discovers a poor pup dumped on his property. This leads him to search for a veterinarian, which brings Otto Markham into his life. The man has accepted that he's meant to be alone, what with prospective partners not keen on the necessity of being on call, what with him being the town vet. Otto may be able to help Ajax the pup heal, but is it possible he can do the same for Hunter this Christmas?
It's been about five and a half years since I last read something from JJ Harper, so when I heard that she had a new standalone to be published for holiday romance season, I took it as an opportunity to reacquaint myself with her writing. This new book was a heartwarming read, one that kept me entertained for the most part. About thirty percent was spent focused on the main characters' respective pasts, most of which were saw them other people. I appreciated having a better idea of how Hunter and Otto were before they met and how they got to the points they were in when their paths finally did cross courtesy of Ajax. Maybe thirty percent was a wee bit much, but I'll take comprehensive background stories to nothing. Once we got to the present, everything flowed nicely, and I became emotionally invested in all things Hunter, Otto, and Ajax. I'm a sucker for a cute furry companion being more than just a prop in a story, so yay. Four stars for Not Just for Christmas.
Date Read: 13 December 2021
Learn more about JJ Harper.
Purchase Not Just for Christmas on Amazon.