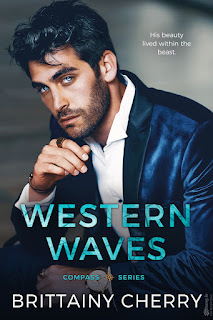 Note: An advance reader copy (ARC) was provided by the author via Give Me Books Promotions.
Brittainy Cherry returns to her Compass series with much awaited third novel. Western Waves is a contemporary romance with a story of two people brought together by the death of a man that was a father figure to one and a complete stranger to the other. When Kevin Michaels' last will and testament is read, the girl he raised is shocked to learn that he wished for her to marry a man named Damian Blackstone. Stella Mitchell's first run-in with him led to tears; the second wasn't that much better. She and Damian are set to inherit an immense amount of money for as long as they wed and stay married for six months. He's the dark to her light, the somber to her sunshine--the Beast to her Cinderella. Could their forced union be a recipe for disaster or will this impossibly be a once-in-a-lifetime happily-ever-after?
This may very well have been a twisted fairy tale, but even with all the twists and turns that the main characters had to go through, they did end up with a well-earned happy ending. Damian and Stella may have had very different upbringings, but they also know all too well what rejection and abandonment feel like and both had emotional scars. There was a great deal of growth with these main characters, and as their story progressed, these two had to decide what and who to let go off and hold on to. There's quite a bit of angst in this story, and naturally, my angst-loving heart was rather happy about the whole thing. (How's that for irony?) Brittainy Cherry delivers a moving story about love and family that pulls at your heartstrings and created characters worth cheering for. Western Waves garners 4.5 stars.
Release Date: 09 December 2021
Date Read: 08 December 2021
Learn more about Brittainy Cherry.
Purchase Western Waves on Amazon.